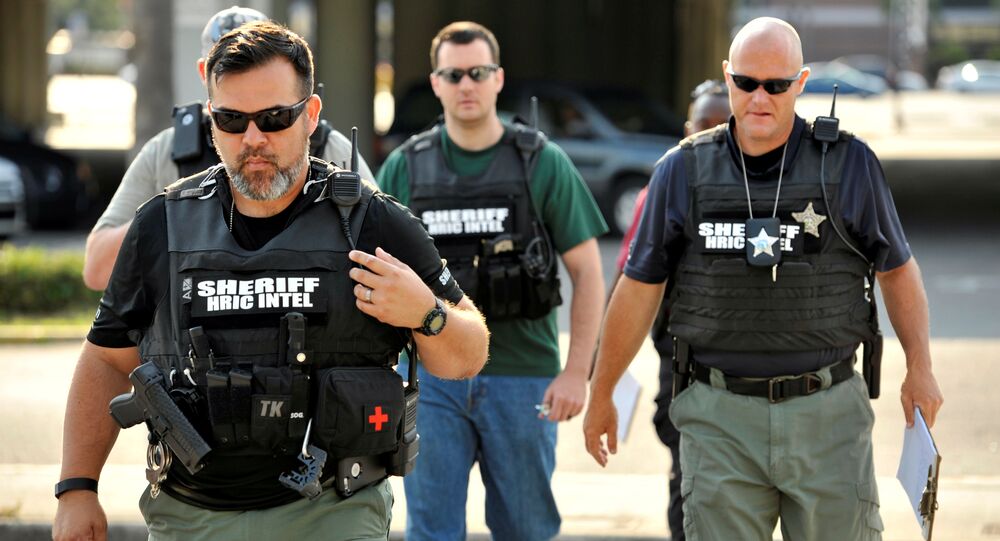 Fifty people died and 53 were injured in a mass shooting at a gay nightclub in Orlando. The attack was conducted by US national Omar Saddiqui Mateen who had possible links to radical Islamist groups. It is the deadliest attack since the September 11, 2011, terrorist attacks on New York and Washington.

"It sounded like fireworks — pop, pop, pop — and then everybody scatters," an eyewitness told The Associated Press.

© AFP 2021 / Mandel Ngan
Orlando Is Shocked: RT Correspondent Report From the Site
There were an estimated 300 people inside the Pulse nightclub when the killer walked in at 2 a.m. and started firing with a semiautomatic gun, a civilian version of the M16 assault rifle. Initial reports said that 20 people were killed.

It is not yet clear how the gunman managed to get inside as there were security guards posted at the front entrance to the club.
Terrified, the people started running out, but the attacker still managed to take a few dozen hostage. Some hid in restrooms, calling police for help.

‘Some guy walked in and started shooting everybody. He had an automatic rifle, so nobody stood a chance," a woman who has been in the club at the time of the attack told AP.

Terrified, the people started running out, but the attacker still managed to take dozens hostage. Some hid in restrooms, calling police and relatives for help.

Around 5 a.m., authorities sent in a SWAT team to rescue the hostages. The police commandos set off two diversionary blasts that helped some of the captives to break free.

Three hours into the standoff police broke inside and killed the gunman.

“There is blood everywhere. Specialists will have to collect a great mass of evidence,” Rep. Alan Grayson said.

Media reported that the attack was conducted by US national Omar Saddiqui Mateen of Afghan descent, who could have links to radical Islamist groups.

Several days prior to Sunday’s attack Mateem, who worked as a security guard, legally bought a Glock pistol and a semiautomatic rifle, both of which were found at the site of the attack.

According to NBC News, Omar Mateen called 911 moments before the shooting and swore allegiance to Daesh.

Gay hater and a Daesh trace

“We are saying we are apologizing for the whole incident. We weren't aware of any action he is taking. We are in shock like the whole country," Mir Seddique Mateen, the father of the Orlando shooter, told NBC.

Earlier Adam Schiff, a member of US House of Representatives, said that Omar Mateen had pledged allegiance to Daesh.

The FBI said they had previously investigated Mateen for possibly having ties or being a sympathizer to Islamic extremism but did not have enough evidence to press any official charges against him.

Daesh, meanwhile, released a statement on Sunday claiming responsibility for the Orlando shooting.

The terrorist organization stressed that the armed attack that targeted a gay night club in the city of Orlando in the American state of Florida which left over 100 people dead or injured was carried out by a Daesh fighter.

In a televised address to the nation US President Barack Obama made no mention of “Islamic terrorism speaking only about “act of terror” and “an act of hate.” He called on his fellow Americans to think again about the role of firearms in their everyday life.

“The shooter was apparently armed with a handgun and a powerful assault rifle. This massacre is therefore a further reminder of how easy it is for someone to get their hands on a weapon that lets them shoot people in a school, or in a house of worship, or a movie theater, or in a nightclub,” Obama said.

“And we have to decide if that’s the kind of country we want to be. And to actively do nothing is a decision as well,” the president stressed.

Presidential hopefuls Hillary Clinton and Donald Trump were quick to weigh in on Sunday’s tragedy.

Clinton expressed her sympathy for the victims and called for stricter gun-control laws.

“We will go after them [terror groups] wherever they are, countering their attempts to recruit people here and everywhere, and hardening our defenses at home. It also means refusing to be intimidated and staying true to our values,” she said in a statement.

Donald Trump, for his part, posted a Tweet saying that the Orlando attack is directly linked to radical Islamic terrorism and called for toughness, smartness and vigilance.

Appreciate the congrats for being right on radical Islamic terrorism, I don't want congrats, I want toughness & vigilance. We must be smart!

The billionaire also urged President Barack Obama to resign for failing to underscore the problem of Islamic terrorism.

Many experts believe that this latest show of Americans’  vulnerability in the face of terror attack could play into the hands of Donald Trump who has made a crackdown on terrorism a major highlight of his campaign.

“America may be one major terrorist attack away from Donald Trump as president,” Politico’s chief editor Blake Hounshell warned back in March.