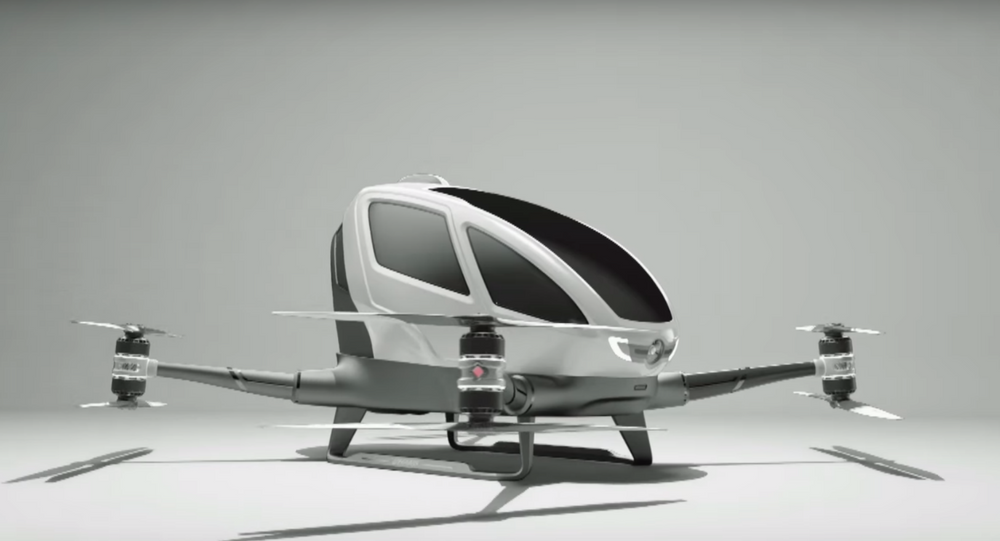 Leaving your life in the hands of a flying computer may not be for everyone, but it could be the future.

© AP Photo / John Locher
WATCH: China Debuts World's First Passenger Drone
A large quadcopter capable of carrying a human passenger along with a small backpack, the UAV follows a flightpath set by the user, and its propellers fold up so that the craft can fit inside a single parking spot.

"The whole world never had something like this before," said Shang Hsiao, EHang co-founder, according to the Associated Press.

Now the drone is ready for test flights in the United States. Working with the Nevada Institute for Autonomous Systems (NIAS), EHang will test the vehicle in the deserts of the American West.

"We first met them at the [International] Consumer Electronics Show in 2016," said Mark Barker, business development director with NIAS, according to the Las Vegas Review-Journal.

"Tom Wilczek [defense aerospace industry representative at the governor’s economic development office] and I were there and we went into their booth and we saw this EHang 184 – it caught everybody’s attention."

While test specifics have not yet been revealed, they will ultimately be aimed at satisfying the Federal Aviation Administration.

"We will help them submit necessary test results and reports to the FAA and all that kind of stuff," Barker said. "It’s a big deal for EHang and it’s a big deal for NIAS and the state of Nevada because we will be helping them to test and validate their system."

For EHang co-founder George Yan, conducting tests in the United States is an opportunity to expand his business.

"It will be a first for the state of Nevada and for the United States, once we get them qualified," he said.

"I personally look forward to the day when drone taxis are part of Nevada’s transportation system," Wilczek said.