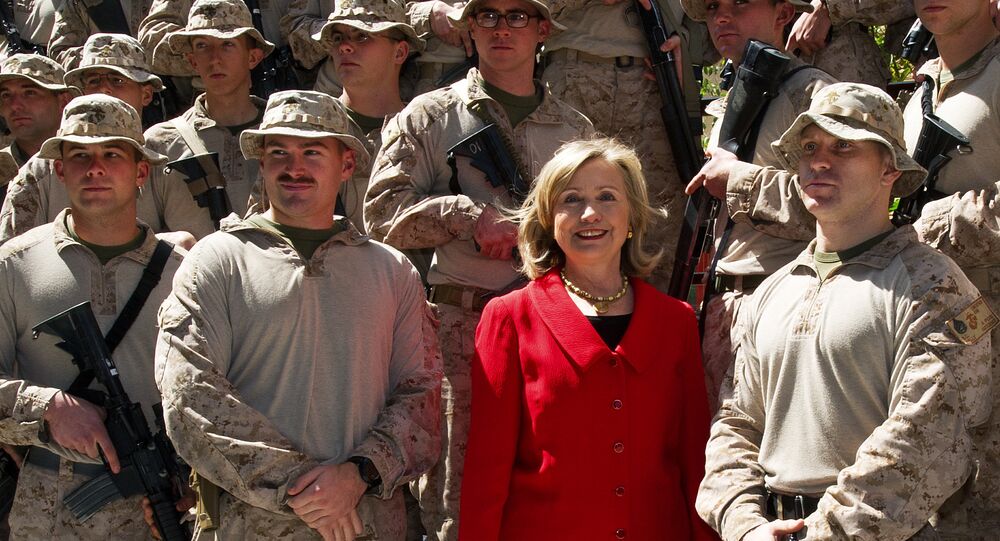 On Thursday, Hillary Clinton suggested that Donald Trump's non-interventionist views would weaken America, and play into the hands of Moscow and Beijing. Veteran US political commentator Pat Buchanan begs to differ, suggesting that Trump can defeat Clinton on foreign policy, and win the election, since what he's arguing for is what Americans want.

Speaking in San Diego on Thursday ahead of California's Democratic primary, where she's facing growing pressure from fellow Democratic candidate Bernie Sanders, Clinton warned that Donald Trump is unfit to lead the free world, and that electing him would be "a historic mistake," Time Magazine reported.

"Moscow and Beijing are deeply envious of our alliances around the world, because they have nothing to match them, Clinton said. "They'd love for us to elect a president who would jeopardize that source of strength," she added.

© REUTERS / Jonathan Ernst
Something is Rotten: Trump, Euroskeptics Ask 'Questions That Must be Asked'
Moreover, the former secretary of state noted, "if Donald gets his way, they'll be celebrating in the Kremlin. We cannot let that happen."

"Countries like Russia and China often work against us," Clinton added, emphasizing that she has had experience going "toe-to-toe with Russia and China, and many other different leaders around the world."

Trump, meanwhile, according to Clinton, "praises dictators like Vladimir Putin and picks fights with our friends – including the British prime minister, the mayor of London, the German chancellor, the president of Mexico and the Pope. He says he has foreign policy experience because he ran the Miss Universe pageant in Russia."

Commenting on the speech, Buchanan suggested that the logic behind Clinton's strategy of painting Trump as unfit to lead is pretty obvious. "As Donald Trump is splitting off blue-collar Democrats on issues like America's broken borders and Bill Clinton's trade debacles like NAFTA, Hillary Clinton is trying to peel off independents and Republicans by painting Trump as 'temperamentally unfit' to be commander in chief."

"In portraying Trump as an intolerable alternative, Clinton will find echoes in the GOP establishment and among the Kristol-Kagan neocons, many of whom have already signed an open letter rejecting Trump," the commentator added.

However, "if Clinton means to engage on foreign policy, this is not a battle Trump should avoid," Buchanan emphasized. "For the lady has an abysmal record on foreign policy and a report card replete with failures."

© AP Photo / Dario Lopez-Mills
Hillary Clinton's 'Greater Experience' is Not a Reason to Vote for Her
These, the analyst pointed out, include her vote to authorize George W. Bush's disastrous invasion and occupation of Iraq. "Clinton calls it her biggest mistake, another way of saying that the most important vote she ever cast proved disastrous for her country, costing 4,500 US dead and a trillion dollars."

"That invasion was the worst blunder in US history and a contributing factor to the deepening disaster of the Middle East, from which, it appears, we will not soon be able to extricate ourselves."

Moreover, Buchanan noted, it was during her tenure as secretary of state that "Clinton supported the unprovoked US-NATO attack on Libya, and joked of the lynching of Moammar Gadhafi, 'We came. We saw. He died.'"

That attack was a venture which President Barack Obama has repeatedly said was the worst mistake of his presidency, the commentator noted.

"Is Clinton's role in pushing for two wars, both of which resulted in disasters for her country and the entire Middle East, something to commend her for the presidency of the United States? Is the slogan to be, 'Let Hillary clean up the mess she helped to make?'," Buchanan mockingly asked.

© AP Photo / Rick Scuteri
Neocons' Latest Foreign Policy Initiative Spells 'Abysmal Failure' for US
"Where in all of this is there the slightest qualification, other than a honed instinct for political survival, for Clinton to lead America out of the morass into which she, and the failed foreign policy elite nesting around her, plunged the United States?"

Buchanan suggested that ultimately, Donald Trump, if he stays true to his message, "can win the foreign policy debate, and the election, because what he is arguing for is what Americans want."

"They understand that, as Truman had to deal with Stalin, and Ike with Khrushchev, and Nixon with Brezhnev, and Reagan with Gorbachev, a US president should sit down with a Vladimir Putin to avoid a clash neither country wants, and from which neither country would benefit," the commentator added.

"The coming Clinton-neocon nuptials have long been predicted," Buchanan suggested. "They have so much in common. They belong with each other. But [the United States] will not survive as the last superpower if we do not shed this self-anointed role as the 'indispensable nation' that makes and enforces the rules for the 'rules-based world order,' and that acts as first responder in every major firefight on earth."

"What Trump has hit upon, what the country wants, is a foreign policy designed to protect the vital interests of the United States, and a president who will – ever and always – put America first," the analyst concluded.