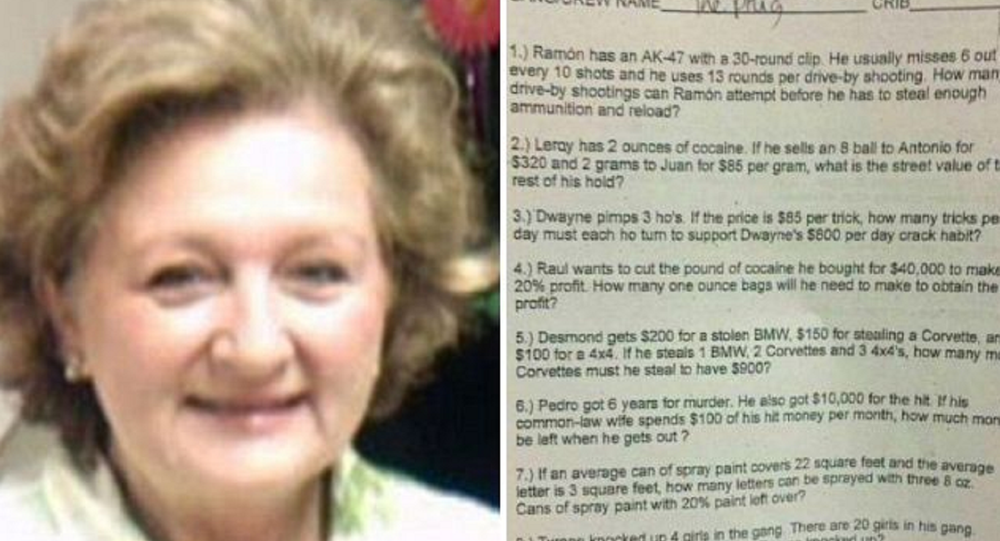 Cali4beach
Atlanta Teacher Charged After Hanging Autistic Child From Hook in Classroom
This is probably not a question ordinarily expected to be included in a public-school eighth-grade language test, but, is only one of several questionably-framed puzzles that got a Mobile, Alabama, language teacher placed on leave.

JoAnne Bolser, a language arts teacher at the Cranford Burns Middle School, was placed on leave after giving her students a language quiz that included phrases such as “pimps and hos,” and referred to AK47s and murder.

"Pedro got 6 years for murder. He also got $10,000 for the hit. If his common-law wife spends $100 of his hit money per month, how much money will be left when he gets out?” asked one question.

The facetious 10-question "City of Los Angeles High School Math Proficiency Exam" had been online for years, and is meant to humorously mock high crime levels in Los Angeles.

“Dwayne pimps 3 ho's. If the price is $85 per trick, how many tricks per day must each ho turn to support Dwayne's $800 per day crack habit?” reads one of the snarky examples.

NBC
Hispanic Group Offers $5,000 For Shouting 'Racist' at Trump During SNL
Amused by the wildly inappropriate subject matter of the questions, a student took a photo of the exam and sent it to his mother, who, along with her husband, stormed the school, demanding answers.

"My son, he took a picture of it in class and he texted it to me," Erica Hall told NBC News. "I couldn't believe it."

Bolser is set to retire this month, but has been placed on administrative leave following an investigation.

'While some of the kids may know what these terms mean they shouldn't have to be flooded with them from school administrators and teachers," parent Jason Boyington, whose son took the quiz, told NBC. "At some point somebody's got to take a stand for righteousness and I think the ball got dropped on this big time."