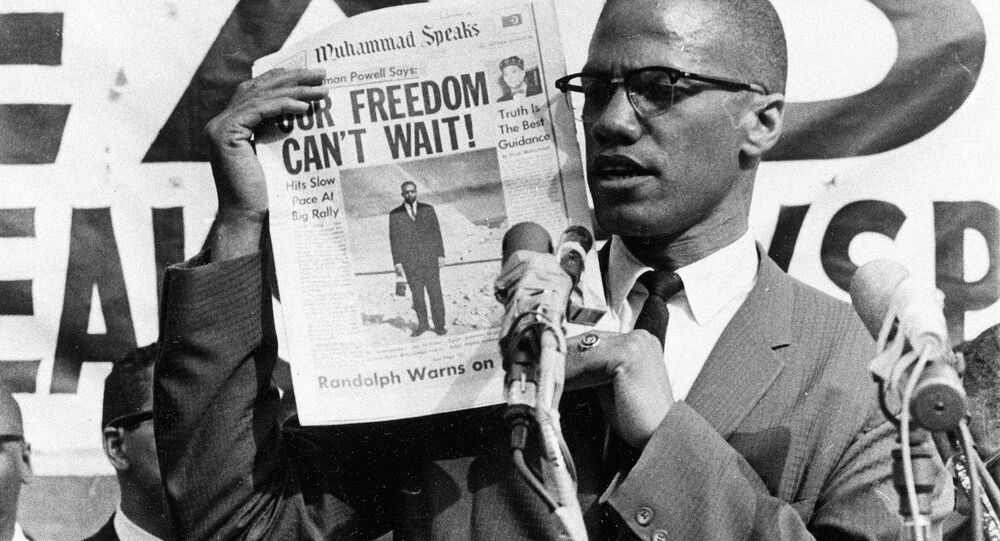 Born Malcolm Little in 1925, Malcolm X escaped from a life of crime, converted to Islam and joined a group of Black Muslims called the Nation of Islam (NOI). After a quick rise in the ranks of the NOI, he broke from the group and its leader, Elijah Muhammad, and become a symbol for the Black American struggle for equality abroad.

​Loud and Clear’s Brian Becker spoke with professor, author and radio host Jared Ball, co-editor of A Lie of Reinvention: Correcting Manning Marable’s Malcolm X, about the enduring legacy of Malcolm X and how the activist’s ideas are largely the reason he continues to be misunderstood, 51 years after his death.

So why it is that Malcolm X is not venerated in the same way that Rev. Dr. Martin Luther King, Jr., the most prominent civil rights activist of that era, has become, when their deaths are only separated by 3 years?

"With Malcolm there is a persistent attempt from the mainstream to do what has been done to King, that is, to water down his politics. And to separate Malcolm X from the radical ideas and the international politics to which he ascribed," Ball said, explaining that King, while more celebrated, put forth a progressive agenda that is also often overlooked.

Becker suggested that Malcolm "was the major figure of the Black nationalist wing of the Black liberation movement" and "rooted the struggle for Black freedom in the United States as part of an internationalist struggle against colonialism, imperialism and racism."

Ball responded that Malcolm X’s international perspective began to take shape while he was still in prison, prior to his conversion to Islam.

"He evolved a much more sophisticated outlook, where he recognized an international, European, white, capitalist, imperialist power structure that was, in many ways unified against the poor and darker people on the planet. And he was building coalitions in the Black nationalist community that were beginning to link up with leaders in the African, Asian and so-called Third world."

Ball added, "Consider what those politics entailed: this combination of Pan-Africanism and Socialism and militant, armed self defense. Brilliant critiques against imperialism and capitalism. If we consider that that had become the standard by which the international community was judging the Black struggle here, we can see how far that movement has been pushed back by the most powerful state in human history."

Becker commented on Malcolm X’s internationalism, noting that when Fidel Castro visited Harlem in 1960 he met Malcolm X, who brought along thousands of locals to help Castro celebrate the Cuban Revolution.

He asked, "What accounted for that? Was it his eloquence? His leadership? When you look at his personal characteristics…why did he make a mark on so many?"

Ball replied that, beyond his imposing physical stature, Malcolm X was able to take advantage of a rapidly expanding media landscape, and through it was able to bring the Black freedom struggle in America to people engaged in similar conflicts in different parts of the globe.

"He brilliantly advocated the kind of politics that resonated well with anti-colonial, anti-imperial struggles throughout the world….This is what created so much concern about Malcolm, and why the state conspired with others to assassinate him, and I think it’s left a vacuum that we’re still looking to fill."