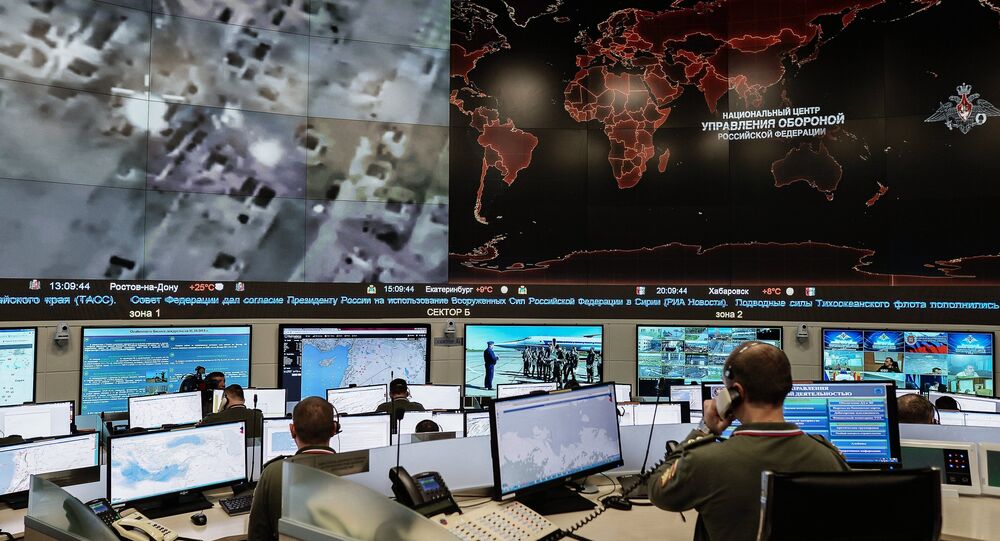 The term “near-peer” is a misnomer when applied by the US with reference to Russia or China, there are certain technological areas where the two countries have gone far beyond, according to Rear Adm. Mike Darrah.

“In some cases, they have gone beyond us,” he added, as quote by The National Interest magazine.

Leggin Behind in Integrated Battle Networks

Among certain key technological areas where the US has fallen behind is in the area of integrated battle networks.

“While Darrah was reluctant to go into details, he did talk about specific areas where the US needs to improve on,” defense editor Dave Majumdar writes in his article for the magazine.

One such area is combat identification, especially in an environment where enemy electronic attacks will be continually disrupting American communications networks, Darrah acknowledged, admitting that the US “is not doing a good enough job at combat ID.”

© CC0
On the Brink of Cyber War? Moscow, Washington Meet Quietly in Geneva
Position, navigation and timing in an environment where there is no access to GPS —or where the enemy is actively attacking satellite navigation —is another area the Pentagon must work on, the Rare Admiral suggested.

It seems that American forces are far too reliant on GPS, and a “smart adversary like the Russians or the Chinese are certain to attack those vital sinews that hold together US military operations.”

Addressing those issues is even more critical, Darrah suggests, as the US Navy moves toward the so-called “tactical cloud” — where every sensor and shooter shares data seamlessly.

“Tactical cloud” is an offensive anti-surface network that will tie targeting information from satellites, aircraft, ships, submarines and the weapons themselves to form a lethal “kill web” designed to keep pace with the expanding lethal power of potential adversaries, Darrah described it in his presentation, as quoted by the US Naval Institute.

The scheme will use information ranging from sensors in space to the undersea to share information in a so-called tactical cloud that will allow aircraft and ships to access a range of targeting information to launch weapons against surface targets,

© Sputnik / Evgeny Biyatov
Losing Their Edge: US Army Studies Russian Military
However, such networks are vulnerable to electronic and cyber-attacks and—as such—Darrah said much more needs to be done to ensure the fidelity of the information in the cloud.

Networking is the future of naval warfare, Darrah reiterated, noting that as times goes on individual platforms will matter less than the sum total of the tactical cloud.

Falling Behind is the Electromagnetic Warfare

In a separate analysis on the issue earlier in December, cyber-security CEO John McAfee reported that another area where the US is falling behind is the electromagnetic warfare.

Military forces are now highly computerized, notes the US-based website Breitbart, comparing the changes to the revolution smartphones and the Internet have brought to the private sector.

Breitbart further quotes the “Winning the Airwaves” report, which states that the US is losing the airwaves.

© Sputnik / Ilya Bogachev
Look Who's Complaining: US Lags Behind Russia in Electronic Warfare
The authors believe the that the US failed to make the necessary investments in EMS (electromagnetic systems) technology after the end of the Cold War, a pause which “provided China, Russia, and other rivals with an opportunity to field systems that target vulnerabilities in sensor and communication networks the US military has come to depend on.”

As a result, the US is on the verge of losing its qualitative edge in EMS warfare, or may have lost it already.

It cites as an example that Russia, China, and “other adversaries fielded radars that operate outside the frequency range of US jammers, and developed their own jammers that are capable of targeting frequencies used by US sensors and radios.”

They have also deployed “large, complex sensor arrays that outrange most sensors carried by US power projection forces.”

© Sputnik / Mikhail Voskresenskiy
How Can the West Offset the East? Spend More Money on Weapons
And in 'Stealth' Technology

In the sphere of “stealth” technology, including both the famed stealth fighters and bombers, plus low-power communications and passive sensors that could do their jobs without giving away their own position, the US “has not made adequate preparations for a more “agile” contest, in which the same systems function as both sensors and jammers, while very low-power communications networks become virtually invisible to enemy detection.”

With regards to all the above, Rear Adm. Mike Darrah seems to be right when he reiterated that the term “near-peer” is “condescending and derogatory — which also has the effect of rendering American policy-makers complacent when dealing with a very real danger.”

US Waging 'Geopolitical Warfare' Against China, Russia in Bolivia – Morales