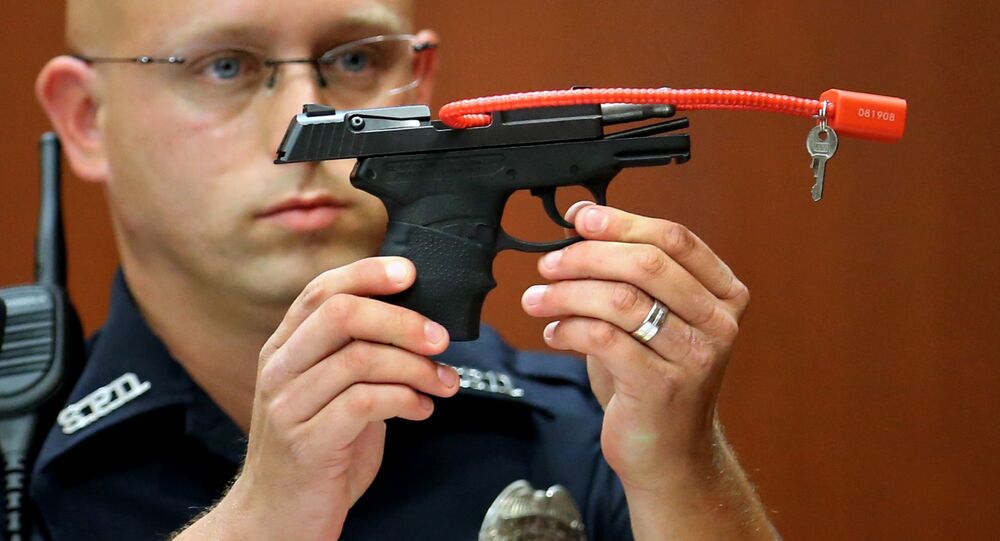 George Zimmerman, the neighborhood watch captain who killed unarmed team, Trayvon Martin has decided to auction the gun that was used in the shooting of the Florida teen.

© AFP 2020 / ROBYN BECK
Justice for Trayvon: Four Years On, Has Anything Changed in the US?
The selling of the firearm has come at a time when racial tensions in the US appear to be stabilizing. However, the auction has not gone unnoticed by campaigners and supporters of Trayvon Martin's family.

In an eBay-style event, George Zimmerman has put the firearm used to kill unarmed teen Trayvon Martin up for sale. The starting bid is currently at USD$5,000 and the auction will begin at 11am ET.

In a statement on the auction website, Zimmerman said that he will use the proceeds from the sale of the gun to put towards destroying Hilary Clinton's anti-firearm rhetoric.

"Prospective bidders, I am honored and humbled to announce the sale of an American Firearm Icon," Zimmerman explains on the website.

Travyon Martin, a 17-year-old boy from Miami, Florida was shot by George Zimmerman, a neighborhood watchman in February 2012. The teen was unarmed and Martin had no previous convictions or criminal record, Zimmerman claimed that the young teen had attacked him and he had to shoot him in self-defense.

His claim is supported on the auction site which Zimmerman is using to sell the gun.

"The firearm for sale is the firearm that was used to defend my life and end the brutal attack from Trayvon Martin on 2/26/2012," Zimmerman's statement says.

When police arrived at the scene of the shooting, they found Zimmerman on the floor, he was bleeding and had bruises on his hands and face.

George Zimmerman was eventually released without charge, however this all changed once the full story was heard.

Trayvon Martin's father was only notified of the killing when he filed a missing persons report. They immediately applied for legal representation and started a Change.org petition, which received more than a million signatures and led to Zimmerman being placed under house arrest.

Many believed that it was racial motives that had triggered Zimmerman's motives for killing the young teen. In a statement by President Obama to the media, he said, "If I had a son he would look like Trayvon Martin." This coupled with the petition led to the case being investigated.

Zimmerman was charged for second-degree murder on April 11, 2012, but the trial began in June 2013. The all-female jury acquitted Zimmerman of murder, triggering protests across several American cities.

The deaths of Martin and several other black men and women across America led to protests, campaigns and the birth of the Black Lives Matters (BLM) movement.

The parents of Trayvon Martin, Sybrina Fulton and Tracy Martin, also established the Trayvon Martin Foundation, a group committed to ending senseless gun violence and to strength families through mentoring and support.

It's a damn shame that we can't be safe or have equal justice in our own country.

This latest move by Zimmerman to sell the gun was met with anger from many campaigners.

In a response to the selling of the firearm, the Martin family said:

Zimmerman states in his auction description that the gun had only recently been returned to him by the Department of Justice and that interest in owning the pistol was high.

"Many have expressed interest in owning and displaying the firearm, including the Smithsonian Museum in Washington DC. This is a piece of American History," Zimmerman's statement said.

George Zimmerman also states that the gun is still operational, despite attempts made by President Obama to render the firearm inoperable.

As well as trying to stop what he calls "Hilary Clinton's anti-gun rhetoric," Zimmerman also wants proceeds to go towards demolishing Black Lives Matter and to help end the career of American Attorney Angela Correys, who was the prosecution lawyer for the case.

"I am proud to announce that a portion of the proceeds will be used to: fight BLM violence against Law Enforcement officers, ensure the demise of Angela Correy's persecution career and Hillary Clinton's anti-firearm rhetoric. Now is your opportunity to own a piece of American History. Good Luck. Your friend, George M. Zimmerman ~Si Vis Pacem Para Bellum~," the online statement read.

Justice for Trayvon: Four Years On, Has Anything Changed in the US?