Obama Will Not Apologize for Nuking Hiroshima During Historic Visit

President Barack Obama’s upcoming visit to Hiroshima should not be interpreted as an apology for the 1945 US nuclear bombing of the city, the White House spokesman said on Tuesday.

The visit, scheduled for later this month, is meant as a "forward-looking signal about his ambition for realizing the goal of a planet without nuclear weapons," Earnest told reporters.

“[Obama] will not revisit the decision to use the atomic bomb at the end of World War II,” Rhodes wrote in a blog post on Tuesday. “This visit will offer an opportunity to honor the memory of all innocents who were lost during the war.” 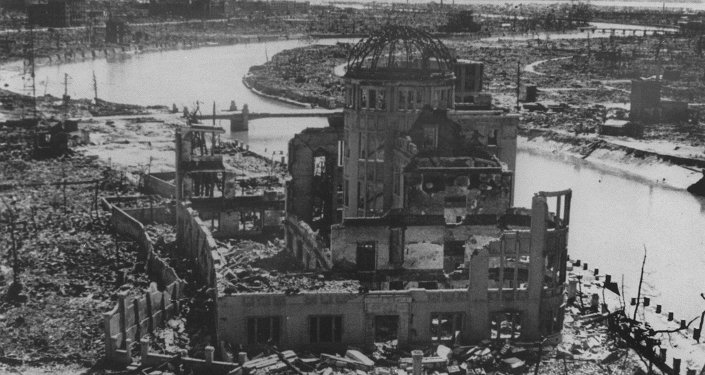 © AFP 2019 /
Will Obama Grab Opportunity to Promote Nuclear Disarmament During Hiroshima Visit?
In Tokyo, Chief Cabinet Secretary Yoshihide Suga had earlier said that Obama’s visit would give a strong boost to the worldwide nuclear nonproliferation movement.

Barack Obama will become the first sitting US President to visit the site where the US dropped an atomic bomb in 1945, killing an estimated 70,000 people in the final days of the Second World War.

Even though the possibility of a US apology was discussed ahead of Secretary of State John Kerry’s recent visit to Japan, Washington was quick to make it clear that there would be no formal apologies offered, Dmitry Streltsov, a Moscow-based expert on Japan, said.

“The Americans consider the nuclear bombings [of Hiroshima and Nagasaki] as fully justified as they helped save the lives of an estimated  one million US soldiers who would have died during a full-scale ground operation on Japanese soil. They also believe that [the bombings] precipitated an early end of WW2. The Japanese view this as a senseless and barbaric act,” Dmitry Streltsov said.

He added that the Americans feared that by saying they were sorry for the 1945 nuclear bombings they would undermine the entire historical concept of their much-trumped war with Japan during WW2.

The mayor of Hiroshima, Kazumi Matsui, earlier said he was not seeking an apology for the US atomic bombing of the city.

“Hurting as they are from the US nuclear bombings of their cities, the Japanese still demand no moral compensation from Washington because they are still grateful to the Americans for their post-war prosperity, democratic institutions, etc. And also for saving them from the militaristic plague that hit their country during the 20th century. That’s why I don’t expect any anti-US outbursts during Obama’s visit, which is seen as a tribute to the memory of the innocent civilians who died there. I think the first visit to Hiroshima by a sitting American President will have a purely symbolical meaning, as an antiwar, pacifist gesture,” Dmitry Streltsov said in conclusion.

Barack Obama will visit Hiroshima with Japanese Prime Minister Shinzo Abe on May 27, after attending the annual Group of Seven summit in Japan.

The city was nearly destroyed by a US atomic bomb on August 6, 1945. Some 70,000 people — mostly civilians — were killed, and others have endured after-effects to this day.

The US dropped a second atomic bomb on the city of Nagasaki three days later. Japan announced it would surrender on August 15, 1945.