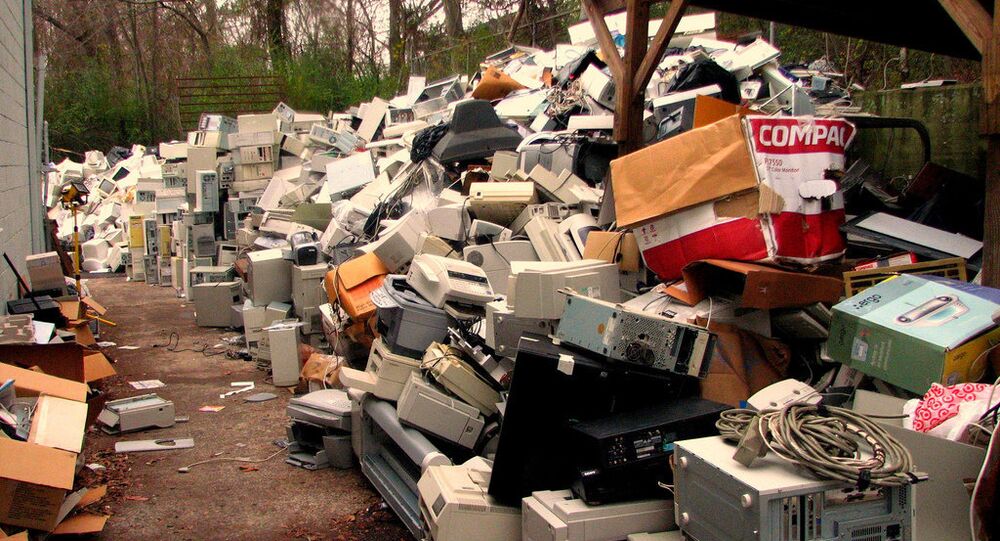 An investigation conducted by a Seattle-based nonprofit has found that nearly one third of toxic electronic waste is exported by major US recyclers to developing countries, where it is often dismantled in conditions that endanger workers and the environment.

© Flickr / Jeff Turner
‘Toxic Waste’: Michigan Governor Investigated in Poisoned Drinking Water Scandal
Hazardous e-waste is generally transported across borders to avoid the cost of managing it safely. Recyclers often seek out poorer countries to send it to, where they will not have to pay fees for the pollution it results in or the danger to workers — who are often children.

The Basel Action Network (BAN), an organization committed to ending the trade in toxic waste, knew the government was not properly tracking e-waste, despite rules and regulations, so they took matters into their own hands.

“BAN has placed 200 small GPS-based tracking devices into old printers and monitors and delivered them to Goodwill and to various recyclers around the country,” the report explains. Goodwill currently has a partnership with Dell for recycling.

After tracking the waste for two years, the organization found that 65 of the devices, or 35%, were sent overseas in container ships. Of those exported, BAN calculated that 62 were illegal shipments, primarily to Asia.

“Much of this trade is illegal under international law, so recyclers have little incentive to disclose accurate information in a survey of waste trade. Similarly, exporters often misrepresent the contents of shipping containers sent to developing countries, in order to get their shipments accepted at the port of entry,” the report detailed.

Out of the 200 devices, 46 were sent to Goodwill stores, who exported 15% of them. Another 28 were delivered to Dell Reconnect stores for recycling, and 21% of those were exported.

“If we only look at the tracker-enabled devices delivered to recyclers and not to those we delivered to charities like Goodwill or to retailers, the percentage of export is far higher – 39%,” BAN explained.

While the majority were sent to Hong Kong, BAN also tracked devices to ten other countries, including China, Taiwan, Pakistan, Mexico, Thailand, Cambodia and Kenya.

According to estimates from the US Environmental Protection Agency, an estimated 3.14 million tons of e-waste is generated in the nation annually, and approximately 40% of it is recycled.

Trash to Treasure: How One Greek Island Is Recycling Refugees' Life Vests