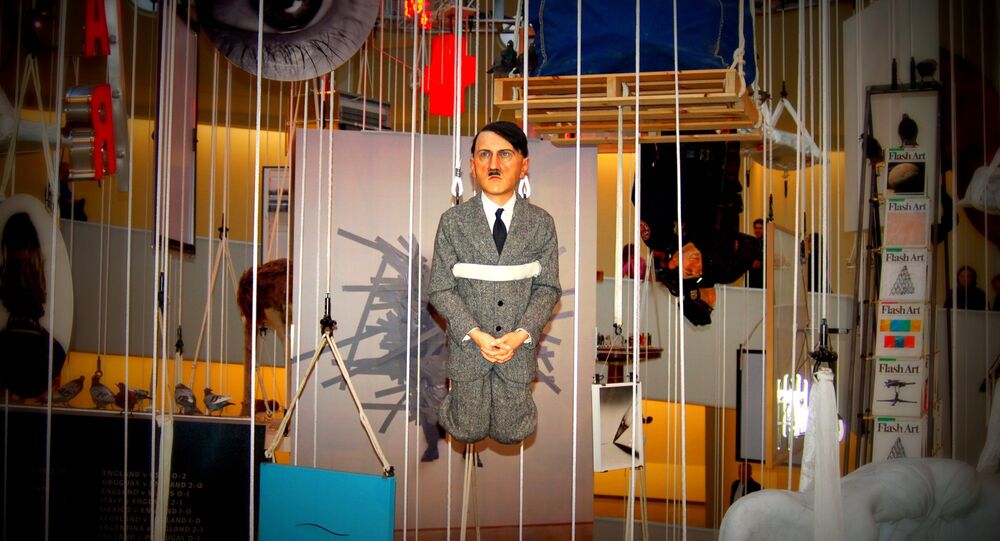 A statue of Adolf Hitler kneeling in prayer, controversial enough that the artist purportedly considered destroying it, has sold at a New York City auction for a whopping $17.2 million.

Twitter/@gaymanga
‘Good-for-Nothing Girl’: Japanese Artist Convicted of Obscenity for Vagina Kayak Project
Created by Italian artist Maurizio Cattelan, the wax statue, titled “Him,” depicts Hitler’s face as middle aged, but with the body of a child in schoolboy attire gazing up, as if in prayer.

The work was presented at auction as part of a “Bound to Fail” sale of themed artwork at Christie’s. Its original estimated value was $10 to $15 million.

The sculpture has spurred outrage in several exhibitions. It has been displayed in locations from Stockholm to a former ghetto in Warsaw, an area where an estimated 300,000 Jews died of starvation or disease, or were sent to their deaths in concentration camps under Nazi rule, Christie's press release stated. During the Warsaw exhibition, the sculpture was only visible through a hole in a fence surrounding a courtyard. Viewers could also only see the back of the statues small frame.

“There is no intention from the side of the artist or the center to insult Jewish memory. It’s an artwork that tries to speak about the situation of hidden evil everywhere. Every criminal was once a tender, innocent and defenseless child,” Fabio Cavallucci, director of the Centre for Contemporary Art, told The Guardian in 2012.

The image even upsets Cattelan himself.

"I wanted to destroy it myself. I changed my mind a thousand times, every day. Hitler is pure fear; it’s an image of terrible pain. It even hurts to pronounce his name. And yet that name has conquered my memory, it lives in my head, even if it remains taboo. Hitler is everywhere, haunting the specter of history; and yet he is unmentionable, irreproducible, wrapped in a blanket of silence," Cattelan has said of his sculpture.

The buyer of the statue remains unknown, as the high bid was placed anonymously by telephone.

"I’m not trying to offend anyone. I don’t want to raise a new conflict or create some publicity; I would just like that image to become a territory for negotiation or a test for our psychoses,” Cattelan asserted.