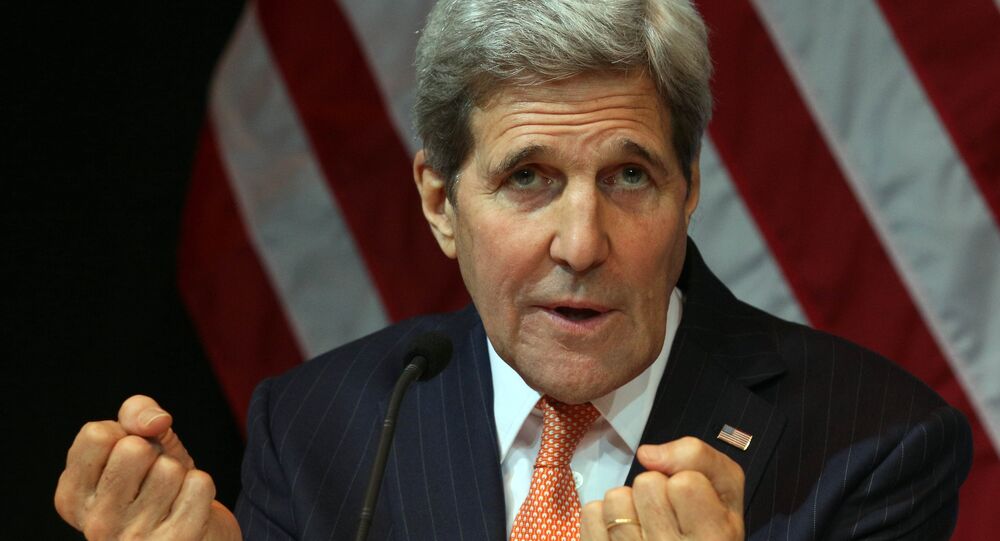 US Secretary of State John Kerry targeted the presumptive Republican presidential nominee Donald Trump on Friday during a commencement speech at Northeastern University in the US state of Massachusetts.

WASHINGTON (Sputnik) — While Kerry did not mention Trump again by name in his speech, he did go after Trump’s foreign policy statements on immigration, national security and foreign trade.

"Classmates of every race, religion, gender, shape, size, 85 countries represented and dozens of languages spoken; you are the most diverse class in Northeastern’s history. In other words, you are Donald Trump’s worst nightmare," Kerry stated.

During the presidential campaign, Trump has proposed stopping illegal immigration by building a wall on the US-Mexico border, and banning Muslims from entering the United States until their identity are confirmed.

Moreover, Trump has called current free trade agreements, such as the Trans-Pacific Partnership, disastrous to the interests of the American people and pledged to renegotiate them.

© AP Photo / Seth Perlman
Trump Has Long Record That Needs to Be Examined - Obama
"The desire to turn inward and shut out the world may be especially seductive in an era as complicated as this, but it is not a responsible choice for the most prosperous and powerful nation on the planet," Kerry claimed.

The secretary noted that the leading US corporations and industries are "going global."

"[Y]ou don’t have to be great at math to understand that our economy can’t grow if we don’t sell things to the 95 percent of the world’s customers who live in other countries."

Kerry also said there are no walls that can stop people who are determined to take their own lives and those of others.