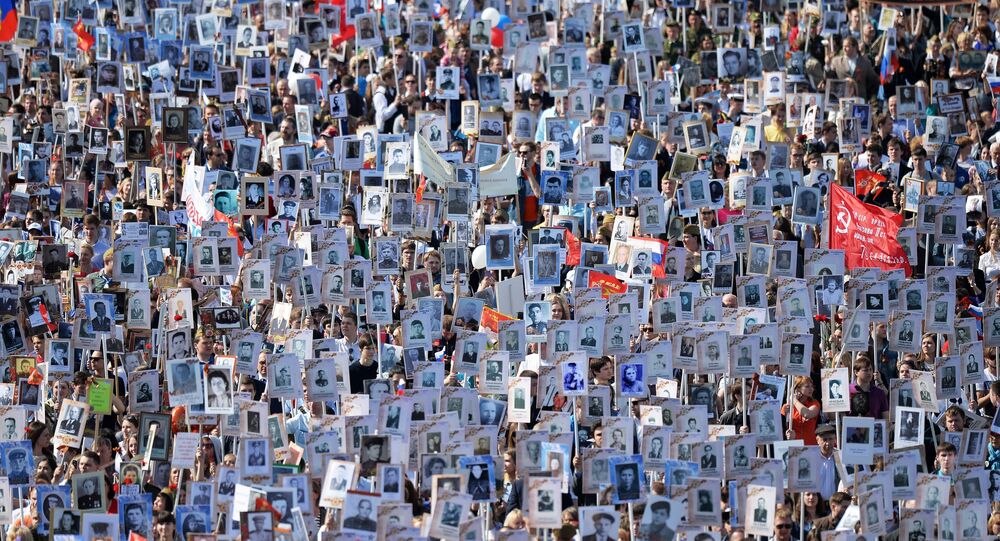 At least nine US cities will hold the "Immortal Regiment" marches, ahead of the Victory Day celebrations, RIA Novosti correspondents reported Monday.

NEW YORK/WASHINGTON (Sputnik) — On May 9, former Soviet republics, including Russia, celebrate the anniversary of the Victory over Nazi Germany. The day also commemorates the end of war in Europe.

The Immortal Regiment is a patriotic initiative that marks the victory. During the marches, people carry photographs of their ancestors, who participated in World War II. The first US march was held in the city of New York on May 3, 2015.

On May 7-8, the marches will be held in Boston, Chicago, Denver, Houston, New York, Orlando, San Francisco, Seattle and Washington.

© Photo : Host photo agency
Vienna to Host ‘Immortal Regiment’ March on Sunday
Igor Kochan, who coordinates the event in the United States, told RIA Novosti that several hundreds, including veterans, people, who survived during the siege of Leningrad (the modern-day St. Petersburg), children of war and historic reenactment groups, were expected to take part in the "Immortal Regiment" march in New York.

In Washington, the activists plan to march from the White House to the World War II Memorial.

Comrades in Arms: ‘Immortal Regiment’ to March Across Paris, Strasbourg

Nobody is Forgotten: 'Immortal Regiment' Marches Across Russia