The latest celebrity campaign in aid of refugees has been launched and there are a number of high profile names that have made an appearance, however it's not the first campaign that a celebrity has pledged to support a humanitarian cause. Here's a selection of others put together by Sputnik.

A celebrity refugee campaign has been started by the United Nations. The video highlights the choice that is made by millions of people across the globe that face crisis and natural disasters. It asks the question — what would you do, if you had to flee your home, escape civil war and leave everything you have ever known behind? The video urges world leaders to do something and not stand by as people suffer.

What makes this campaign unique from others is that it showcases a variety of high profile names from across entertainment and film. From actors Forest Whittaker, who is a UNESCO special peace envoy and Michael Douglas, UN Messenger of Peace, to actress Rosario Dawson, each one asks the viewer what they would do if they faced a similar situation to someone living in a war-torn country.

These famous faces are not alone in their crusade to see the world a better place, however. Here is a list of other celebrity campaigners.

Jolie is perhaps one of the most famous stars to endorse and support charities and humanitarian causes. The Oscar-winning actress, professional model, mother to six children, wife to actor Brad Pitt and a natural beauty both inside and out, needs no introduction as a humanitarian spokesperson. 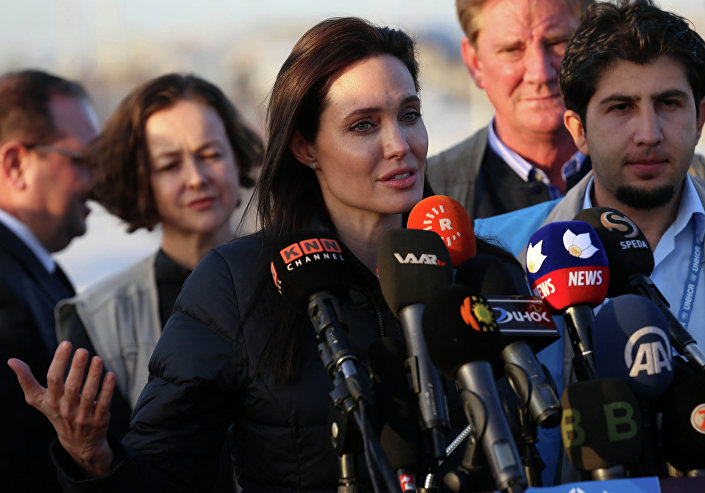 © AFP 2019 / Safin Hamed
US actress and UNHCR ambassador Angelina Jolie delivers a speech during a visit to a camp for displaced Iraqis in Khanke, a few kilometres (miles) from the Turkish border in Iraq's Dohuk province, on January 25, 2015.

Celebs making a difference: The Jolie-Pitt Foundation for Poverty, Conservation and Protection of Natural resources pic.twitter.com/FlV70laYa2

It donated US$1 million to Doctors Without Borders, an international medical humanitarian organization created by doctors and journalists in France in 1971. The organization provides aid in nearly 60 countries to people whose survival is threatened by violence, neglect, or catastrophe, primarily due to armed conflict, epidemics, malnutrition, exclusion from health care, or natural disasters, for emergency medical assistance to help victims of the Haiti earthquake.

Paul David Hewson, known to the world as Bono, is famous for his contribution to music but is also an avid supporter of the work done by charities across the world.

The Irish frontman of the rock band U2, knows no limitations when it comes to fighting poverty and hunger, and is constantly in direct contact with world leaders and policy makers in his quest to make the world a better place.

Bono was inspired to get involved in charity after seeing TV series and benefit show 'The Secret Policeman's Ball' in 1979. Since then, he has helped Amnesty International and has also been involved in the Band Aid project.

Elton John is no stranger to celebrity endorsement of charities, having seen so many of his friends die of HIV/AIDS over the past years.

Why we need to focus on ending the AIDS epidemic by 2030: https://t.co/JS4IRuw0Ek pic.twitter.com/Hv2x1ndq6i

He started the Elton John AIDS Foundation (EJAF) in 1992, with the aim of helping those who had the illness.

"I have lost many dear friends to this terrible disease," Elton says on the EJAF website.

"In the mid-1980s, I began channeling my grief into efforts to help raise money for the pioneering charitable organizations that formed during those dark, grim years to fund AIDS research and provide vital services to people with HIV/AIDS."

Keep the World Tidy: ‘1 Piece of Rubbish a Day’ Campaign Gets Thumbs Up