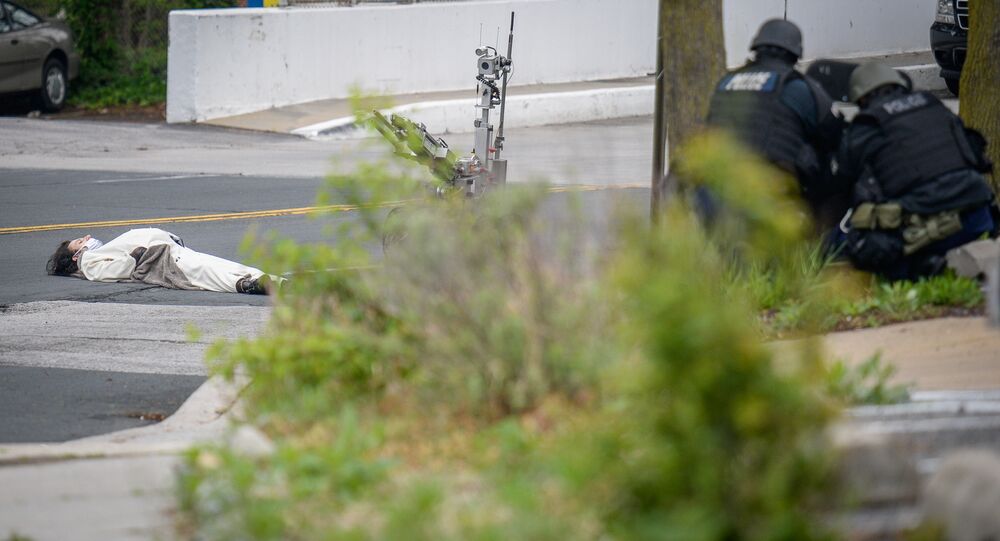 Man Dressed as Beast Claims to Have a Bomb, Forces Evacuation of TV Station

In what could be the plot of an action film, a man dressed in what some reports described as a panda suit entered the Baltimore Fox affiliate television station demanding to deliver a flash drive that contained critical information, and claiming that he had a bomb.

Another reporter referred to the costume as a “hedgehog onesie.”

Prior to the man entering the lobby of the building, the gas tank in a vehicle parked outside was lit on fire. It has since been extinguished by fire crews.

Once the man — who is described as a "white man in his 20s," was in the lobby, he reportedly demanded to deliver a flash drive, and warned that he had a bomb and would otherwise blow up the building. All employees were safely evacuated following the threat.

“He seemed pretty serious and I just tried to keep him calm,” a witness said. “The first words that came out of his mouth were ‘this is not a joke, I have a bomb and I want my message to be heard.’”

Jessica Kartalija, an anchor at the Baltimore CBS station tweeted just after 3:00 PM that the suspect was outside the building and had been shot with “something,” and was on the ground.

© Flickr / Tony Webster
Plainclothes Baltimore Cops Shoot 13-Year-Old Boy Holding Toy Gun
"Someone came into the front of the building and they apparently said that they had some information they wanted to get on the air," News Director Mike Tomko told reporters.

"I came down at one point not knowing the person was in the lobby, near the vestibule area. He talked to me and was wearing what appears to be a full body white panda suit, surgical mask and sunglasses. He had a flash drive, said he had information he wanted to get on the air. He compared it to the information found in the Panama Papers. I told him, 'I can't let you in, you're going to have to leave the flash drive here and slide it through the opening.' He wouldn't do that. Apparently he had made some threats before."

Immediately following the shots fired, reporters on the scene stated that law enforcement said he was “likely” shot with bean bags, and that he was alive.

At a news conference shortly after 3:30 PM, T. J. Smith, the media relations director for the department, confirmed that the man was in fact shot by a counter sniper and that it was not a less lethal round.

As of 3:40 PM he was still on the ground with his hand in his pocket and still refusing to comply with officer demands. Due to his refusal to comply, the department was unable to provide immediate medical assistance.

The plan, according to Smith, was to send in a robot with arms to manipulate his body and attempt to get his hand out of his pocket and away from any potential detonator or weapon that he may have.

Around 4:00 PM a second robot that was brought in retrieved the man's vest, and at 4:15 PM he was placed into the back of an armored vehicle and removed from the scene.

He is expected to survive and the device he was wearing was reportedly made from chocolate bars and wires.