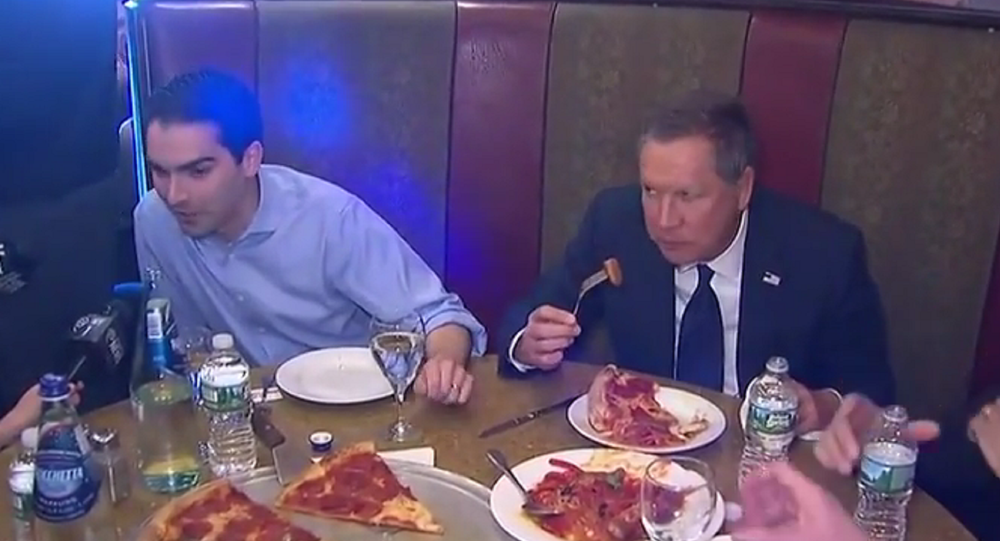 Following the news that candidates Ted Cruz and John Kasich have teamed up against Donald Trump, the former reality television producer hit back with an issue that really matters -- the fact that Kasich is a “disgusting” eater.

© AFP 2021 / Michael B. Thomas
Trump Urges Bernie Sanders to Break With Dems for Independent Run
Just last month, Kasich also drew the scorn of the internet for eating his pizza with a fork.

"I have never seen a human being eat in such a disgusting fashion," Trump said at a campaign event in Rhode Island on Monday.

"I'm always telling my young son Barron, I'm saying and I always do it with my kids," he said, "I would say, 'Children, small little bites.' This guy takes a pancake and he's shoving it in his mouth. It is disgusting. Do you want that for your president? I don't think so, I don't think so. Honestly, it's disgusting."

Following the Rhode Island rally, Trump spoke in Pennsylvania, continuing his attacks on Kasich’s dining habits, calling him "a stubborn guy who eats like a slob."

Trump followed up his comments about Kasich’s eating habits with the declaration that he is more handsome than his competition.

“Do I look like a president? How handsome am I, right? How handsome?" he said. "Somebody said, 'He really does look good but you know, I don't know if he's presidential.' And I'm looking at this stage of people—my competitors. Does Hillary look presidential?"

Trump, following the habit of all bullies, uses belittling nicknames for those whom he feels threatened by, coming up with such gems as, “Crooked Hillary,” “Lyin’ Ted,” and “Little Marco,” and, in an apparent lack of creative inspiration, calling Kasich, "1 for 38 Kasich.”

"Lyin' Ted Cruz and 1 for 38 Kasich are unable to beat me on their own so they have to team up (collusion) in a two on one," Trump tweeted on Monday.

Cruz, Kasich Join Forces Against Trump and Some News That Actually Matters