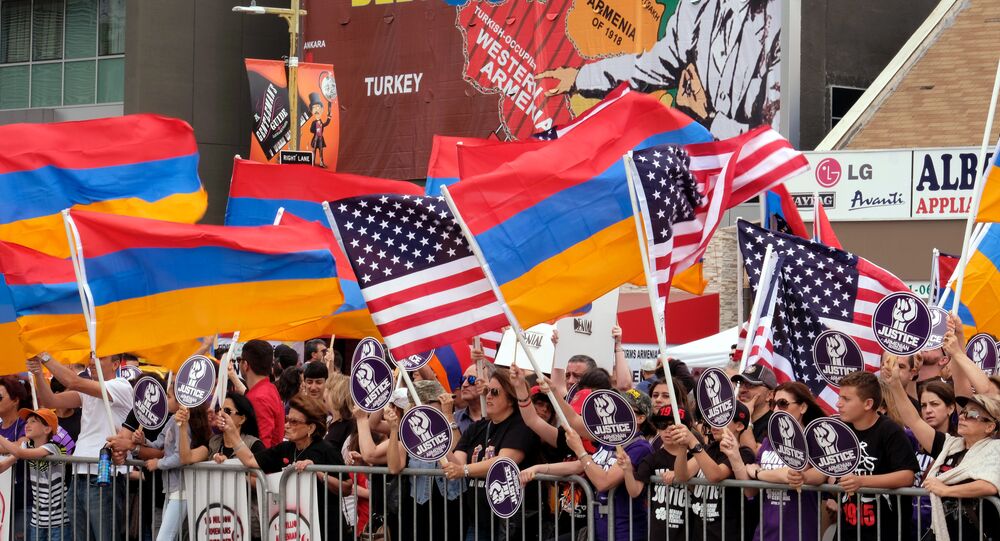 Tens of thousands rallied outside the Turkish Consulate in Los Angeles on Sunday to call for justice for Armenians slaughtered in 1915 on orders of the Ottoman Empire government.

© AFP 2021 / KAREN MINASYAN
Armenia Will Never Give Up Fight to Get Turkey to Recognize Genocide
MOSCOW (Sputnik) — Some 60,000 protesters rallied outside the Turkish Consulate in Los Angeles on Sunday to call for justice for Armenians slaughtered in 1915 on orders of the Ottoman Empire government, US media said.

Sunday marked the 101 anniversary of what Armenians and many other nations say was genocide of ethnic Armenians. Turkey refuses to recognize the murder and starvation of some 1.5 million as an organized effort, saying Turks were also victims.

"Today, we are all Armenian. We have one cause and that cause is justice, " US Representative Adam Schiff said in an address to the crowed, as quoted by Los Angeles Times.

People at the gathering waved Armenian flags and held up signs demanding justice and reparations from the Turkish government, according to the outlet.

Earlier in the day, Turkish President Recep Tayyip Erdogan sent a message to General Vicar of the Armenian Patriarch of Constantinople Archbishop Aram Ateshian, expressing his condolences to relatives of the victims of the 1915 massacre.