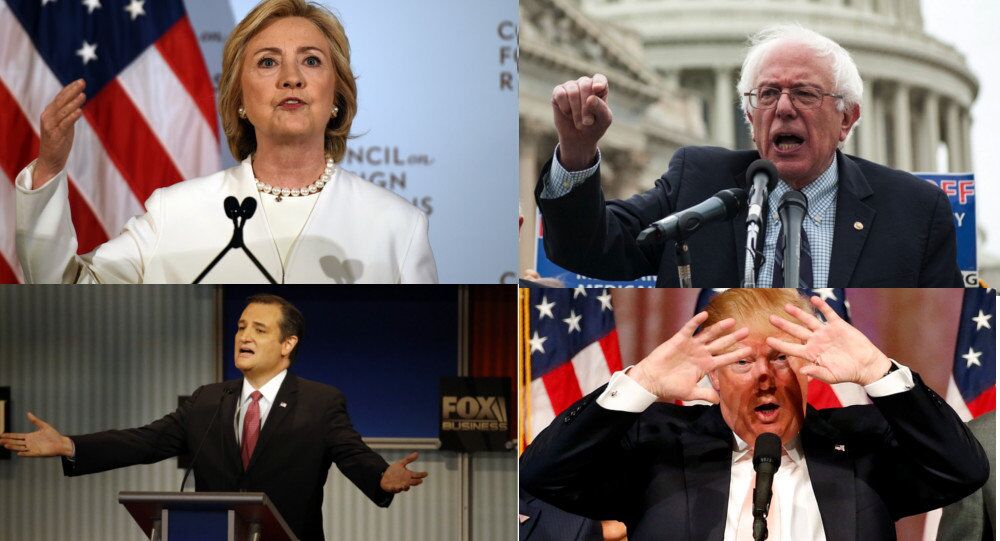 Money Talks: Who is Financing the US Presidential Campaign?

The US presidential candidates and their affiliates have spent over a billion dollars on the campaign trail, with over $176 million of that amount provided by a handful of financiers, energy company owners and construction magnates. Russian business newspaper RBC offers an interesting rundown on who gets how much and from where.

© REUTERS / Brendan McDermid
'A Fixed System': New York Primaries Prove Predetermination of US Elections
Just over six months are left in the run up to the presidential elections in November. The Democratic Party has primaries remaining in 19 states, the Republicans in 15. A number of key states (including New York, Florida, Texas, and Massachusetts), have already voted. Key remaining states include Pennsylvania, California and Indiana, results from which will help to determine who among the two viable candidates on each side will represent their respective party in November.

So far, polls suggest, former US Secretary of State Hillary Clinton remains the clear frontrunner, leading against Democratic rival Vermont Senator Bernie Sanders, but also against Republican frontrunner Donald Trump. According to Fox News polling from earlier this month, 49% of Americans would be ready to vote for Clinton, versus 39% for Trump.

And Clinton, RBC notes, "also has a strong lead in fundraising." In early April, data compiled by the Center for Responsive Politics, as well as candidates' filings to the Federal Election commission, calculated that $222 million of the total funds raised went to the Clinton campaign. The Sanders campaign, for its part, raised $139.8 million.

Among the Republicans, the business newspaper notes, Texas Senator Ted Cruz, Donald Trump's only serious opponent, "was greeted coolly by donors at the start of the campaign," with contributors favoring former Florida Governor Jeb Bush and Senator Marco Rubio. "But when Trump began to win primaries and Bush and Rubio dropped out, large capital holders were forced to change their strategy."

© REUTERS / Mike Segar
The Hillary Effect: Female President Idea Scares Men Into Supporting Trump
"By late April Cruz collected $122 million (Bush ended his campaign with $159 million, Rubio with $119 million). And the work continues. In late March, Republican donors met in New York, where they decided to provide additional support to Cruz…Many who funded the Bush and Rubio campaigns in recent weeks have been busy attracting investors for the Texas senator."

At the same time, RBC notes, "Trump's campaign raised only $36.7 million, with $24.6 million of that money provided by the billionaire himself, and another $9.5 million in private donations, mostly small individual contributions. In spite of the considerable difference in the funds raised, Trump confidently won the April 19 primary in New York, receiving 90 delegates to support him at the convention in July, while Cruz didn't get a single delegate."

According to the FEC, since summer 2015, 158 individuals and families donated sums of $250,000 or more, the sum total of their contribution amounting to $176 million. Another 200 families donated over $100,000 to their preferred candidates.

"Among the 158 most generous sponsors, the New York Times calculated that 64 are employed in the financial sector, 17 in the energy sector, and 15 in real estate and construction, with 12 contributors working in or owning media assets, and 12 in the health sector. The majority of the donations went to the Republicans."

At the same time, RBC said, in contrast to Clinton, "Bernie Sanders, known for his criticism of money from Wall Street, is supported not by big business, but by ordinary voters. Nearly all of the $139 million collected for his campaign came through private donations, 66% of it in the form of small sums."

In addition to contributions from individuals, families and business, this election has already seen Super PACs figuring more prominently than ever before. "According to The Washington Post, their number has reached over 2,300, and they have collected funds exceeding $600 million. In 2012, Super PACs raised a total of $828 million through the entire election cycle."

© AP Photo / Michael Dwyer
Death of the Two-Party System? US Election Could Turn Into a 4-Way Race
Ultimately, RBC noted, "large businesses in the US often finance several candidates at once. This strategy is aimed at preventing the victory of a particular party or politician. In the course of the current campaign, over 60 donors funded both the Clinton and Bush campaigns. For example, Lloyd Blankfein, the chairman of the board of directors of Goldman Sachs, donated to three candidates – Cruz, Bush and Clinton, simply because he considers self-described democratic socialist candidate Bernie Sanders to be the most dangerous candidate."

Sputnik leaves it to readers to reach their own conclusions about the significance of the figures, and whose campaigns they finance. In any case, RBC's analysis is just one more indication that the world, including Russia, is watching the American election very closely, not only to get a handle on future US policy, but also to observe whether the US practices what it preaches when it comes to rhetoric about democracy.

Time to Open Our Nomination System to All Voters?