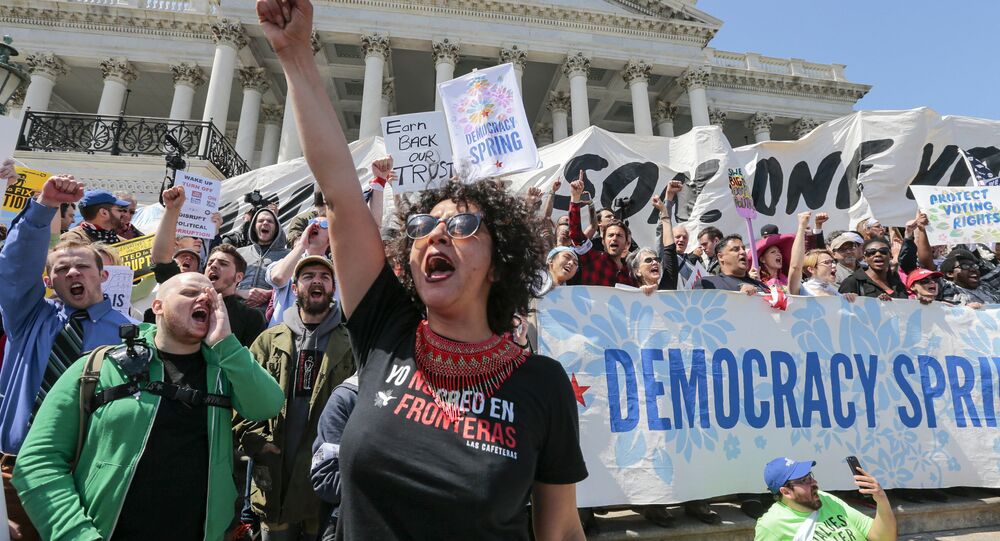 Rebellion in the Rotunda: #DemocracySpring Confronts US Lawmakers (VIDEO)

As part of this week’s Democracy Spring protests that have taken over the US Capitol steps, demonstrators barricaded themselves inside the Capitol Building in an attempt to force US lawmakers to address big money in politics.

"American democracy is in crisis," Kai Newkirk, Democracy Spring’s Campaign Director, said in a press release. "When hundreds of people are being arrested day after day at the Capitol, we need our elected officials and those running for office to stand up and speak out to end legalized political corruption and voter suppression."

In addition to the over 700 arrested during mass sit-ins at the Capitol throughout the week, fifteen activists anchored themselves to the US Capitol Dome on Friday morning.

"Americans from across the political spectrum will continue to rally around these issues until Congress takes action," Elise Whitaker, one of those who demonstrated inside the rotunda, said according to the press release.

"What we’re seeing here is truly a historic moment as the American people no matter what their politics are coming together to demand that Congress do its job."

Sit-ins will continue through the weekend.

Despite the scale of the Democracy Spring movement, it has received very little coverage in the mainstream media.

Celebrities Join #DemocracySpring at US Capitol, Sit In for Arrest on Day 5