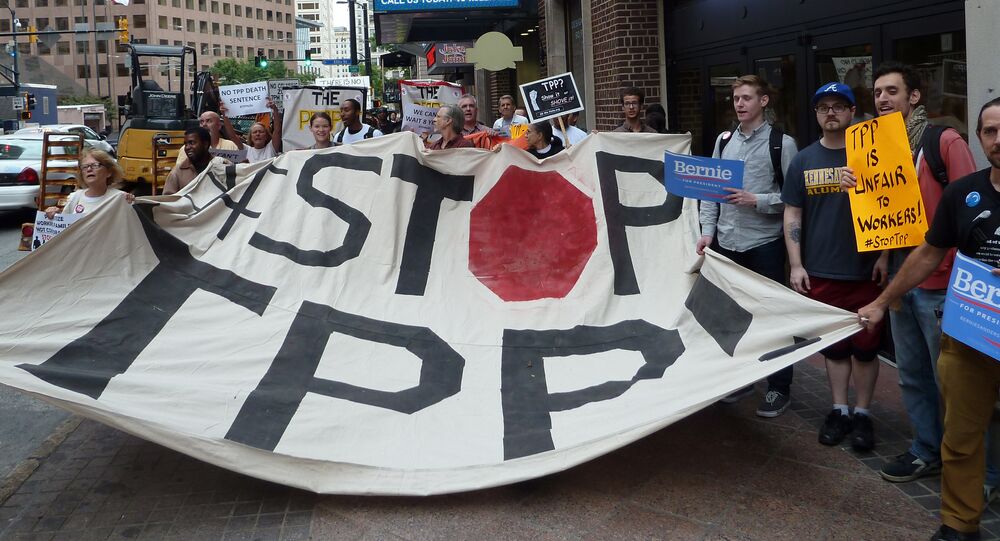 The Obama administration offered the American shoe company New Balance government contracts so that they wouldn’t call foul on the Trans-Pacific Partnership, which disadvantages American companies that do not outsource labor.

The Trans-Pacific Partnership (TPP) has been a source of controversy within the United States, drawing fire from non-establishment candidates on both sides of America’s Republican-Democrat political divide, with many calling it "NAFTA on steroids," comparing it to the ruinous Clinton-era trade pact that led to the closing of many of America’s factories.

Former Secretary of State and Democratic Presidential frontrunner Hillary Clinton was quoted at the time that she began negotiating the agreement with the Obama administration, calling the TPP deal "the gold standard of free-trade." However, as Americans have grown wary of the consequences of globalism, Clinton the candidate soon retracted the statement.

Her lead opposition in the Democratic Primary, Bernie Sanders, is quoted as saying "The Trans-Pacific Partnership trade agreement is a continuation of other disastrous trade agreements." Republican frontrunner Donald Trump says, in regards to the deal, "The American worker is being crushed," and, "we need to renegotiate these trade deals because our leaders are stupid."

On Thursday, news broke that may forever alter the Democratic-Republican divide on labor. Historically, union and worker movements have aligned with the Democrats in opposition to globalism and in favor of advancing work standards, while Republicans have long championed a Libertarian-themed free trade arrangement, valuing corporations as people.

The news that could change the political divide broke Thursday: President Obama attempted to bribe Boston-based New Balance shoes, a company that only produces their product in the United States, so that they would not blow the whistle on the disastrous impact of the TPP on America’s workers and factories.

New Balance senior company officials stated on Thursday that they stayed quiet in the face of the disastrous trade agreement because they were told that they would receive "serious consideration" for a contract to outfit America’s military with running shoes, if they kept silent.

The offer to outfit America’s forces came after New Balance initially led the charge of American workers against the TPP, a treaty that would further lower the costs for competitors importing shoes from Vietnam. Suddenly and surprisingly, New Balance drifted away from this fight.

New Balance broke that silence after the Pentagon failed to follow through on the proposed deal and, according to New Balance officials, are intentionally delaying any purchase of their products.

The company refused to categorize the arrangement as a bribe, saying that the suggestion from the Pentagon was merely that they would be considered if they stopped speaking out against the trade deal. "There was no quid pro quo deal,” said Rob DeMartini, CEO of New Balance to Boston’s WMTW radio show. “We wanted to compete for a big piece of business that we are very confident we can win."

Matt Lebretton, VP of Public Affairs at New Balance gave a more startling account to the Boston Globe saying, "We swallowed the poison pill that is TPP so we could have a chance to bid on these contracts and we were assured there would be a top-down approach at the Department of Defense if we agreed to either support or remain neutral on TPP."

Lebretton said that the company broke the silence once it became clear that the company would not be granted a contract from the Pentagon. "The chances of the Department of Defense buying shoes that are made in the USA are slim to none while Obama is president," said Lebretton.