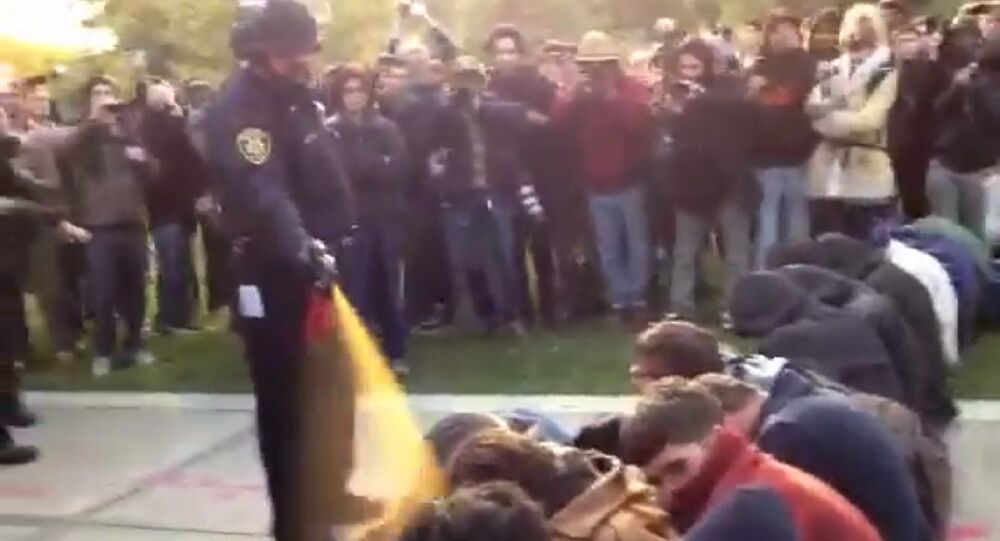 In the wake of a meme based on the infamous photo of a University of California, Davis cop pepper-spraying students who were peacefully protesting, it has been revealed that the institution spent nearly $200,000 to have news, commentary and other online mentions about the incident stripped from the Internet.

© AFP 2020 / PAUL J. RICHARDS
Pennsylvania Police Use Pepper Spray to Disperse African-American Gathering
Campus policeman John Pike went massively viral in 2011 when he assaulted demonstrators by spraying them in the face as they sat with their arms locked in peaceful resistance.

New documents obtained by the Sacramento Bee show that after the incident, the university hired “reputation management” experts for $15,000 a month to clean up negative comments directed at the university and its chancellor, Linda Katehi.

“We have worked to ensure that the reputation of the university, which the chancellor leads, is fairly portrayed,” UC Davis spokeswoman Dana Topousis told the Bee. “We wanted to promote and advance the important teaching, research and public service done by our students, faculty and staff, which is the core mission of our university.”

The company the university hired, Nevins & Associates, promised the "eradication of references to the pepper spray incident in search results on Google," by promoting a "surge of content with positive sentiment."

“It is troubling that the administration chose to spend scarce public dollars and to nearly double its PR budget when tuition soared, course offerings were slashed and California resident students were being shut out,” Assemblyman Kevin McCarty, who chairs the Assembly Budget Subcommittee on Education Finance, stated in a response to the Sacramento Bee’s report: “These findings just raise more questions about university priorities.”

As for Pike, he was not disciplined for his actions, and was instead awarded $38,055 in workers’ compensation for “continuous trauma” that he endured after assaulting the peaceful students.

His victims, in comparison, each received $30,000 in a settlement.