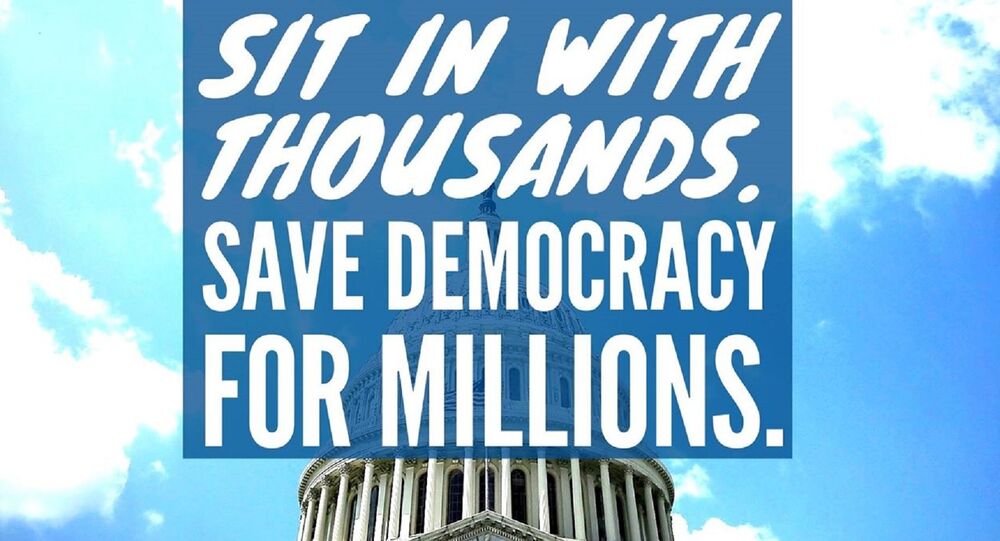 After nearly 400 protesters were arrested in front of the US Capitol on Monday, Democracy Spring demonstrations continue on Tuesday, despite a mainstream media blackout.

"Today a great many Americans took a stand to save their democracy by demanding that Congress immediately end the corruption of big money in our politics and protect all Americans’ access to the ballot," Peter Callahan, Democracy Spring’s communications director, told Sputnik.

"It was inspiring to see this many Americans put their boots on the ground and their liberty on the line to demand the democracy that the founders of our country dreamt of."

The mass civil disobedience sit-in began on Monday to demand the restoration of equal voting rights in the United States and an end to political corruption. Hundreds of demonstrators were loaded onto police buses, but despite the mass arrests, hundreds more have gathered on the steps of the Capitol on Tuesday.

While police apprehended a record number of protesters on Monday, filling the capital’s holding cells to capacity, mainstream media cable outlets devoted roughly 30 seconds of coverage to the event.

"Eighty-five percent of Americans agree that we need to address the legalized bribery that is our pay to play system and today’s impressive turn out shows the resolve of these patriotic defenders of the Republic in demanding that Congress immediately take action to redress these easy to resolve grievances," Callahan said.

Protests will continue throughout the week, with Democracy Spring representatives claiming that over 3,700 people are willing to risk arrest.