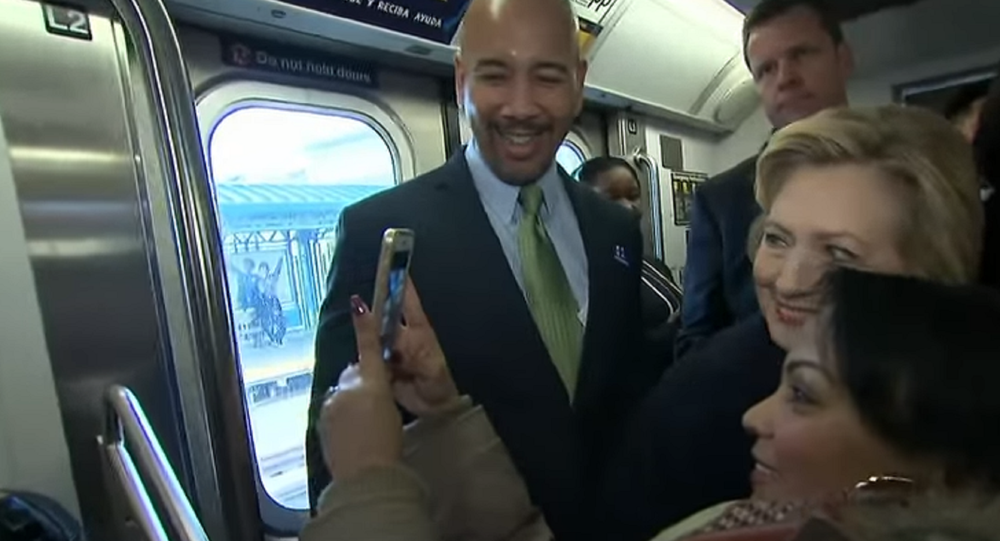 In another example of Hillary Clinton’s disregard for rules and the unwillingness of the US mainstream media to call her on it, the Democratic frontrunner has illegally campaigned on the New York City subway.

As social media exploded to mock the candidate for not knowing how to use a metrocard, everyone overlooked the fact that campaigning on the train, like performing, is against the Metropolitan Transportation Authority’s (MTA) Rules of Conduct.

As the Guardian pointed out, Section 1050.6(c)1 of the subway rules state unequivocally that none of these activities may be performed on the subway cars, and Clinton is clearly seen in videos campaigning aboard moving trains.

Rubén Díaz Jr, the president of the Bronx borough in New York City, was also guilty of campaigning for the candidate, as he introduced her to enthusiastic riders as “the next president of the United States, Hillary Clinton.”

“The incident is all the more galling because there are actual, regular New Yorkers trying to make ends meet who are arrested for violating the same rules that Clinton disregards with impunity,” Ali Gharib wrote for the Guardian.

Buskers who are caught violating the rules are often fined or even arrested. A group called Busk NY has been outspoken on fighting against the heavy penalties faced by street performers. There are countless documented cases of harassment, but Clinton nonetheless seems to have immunity.

“When performers are playing music they are thought to be committing a crime and arrested,” Matthew Christian of BuskNY told the Guardian. “And apparently when Hillary Clinton does public speaking on a train car, that is not considered a violation of the statute.”

This is not the first time that Clinton has been accused of acting above the law during the primaries.

In March, for example, the Sanders’ campaign accused her of mingling with staff during breaks in the debate, an action that is strictly forbidden.

Clinton 'Confident' She Will Win Democratic Nomination for US President