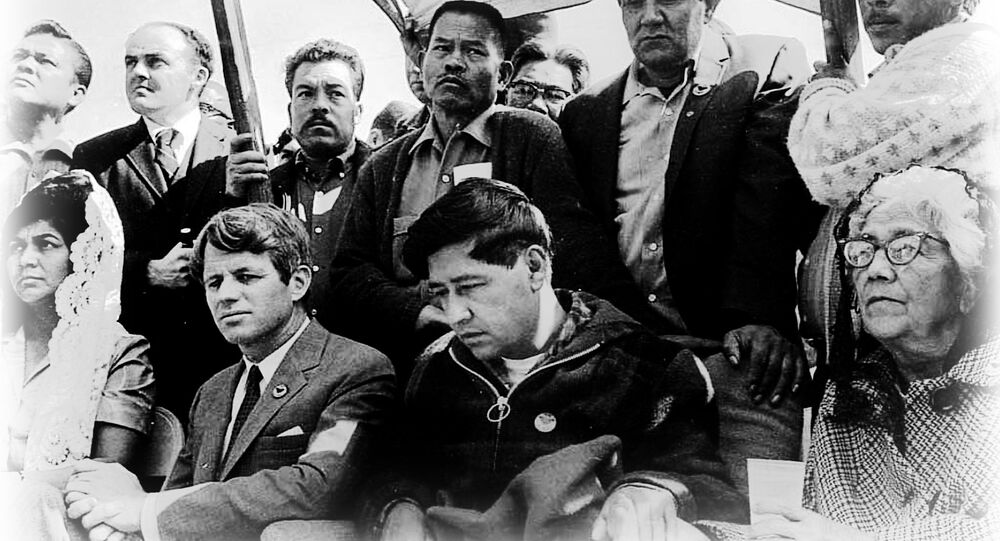 Thursday is Cesar Chavez Day, commemorating the life and struggle of the civil rights icon who fought the discrimination and repression of America’s agricultural workers.

Thursday marks Cesar Chavez Day, a commemorative holiday celebrated in ten of the United States and a day that President Obama had called to be named a national holiday in 2008. Cesar Chavez, the civil rights icon, in 1962 was instrumental in creating the first farmworkers union, the United Farm Workers of America, representing the most highly repressed and discriminated workers in the country.

On this holiday, Loud & Clear’s Brian Becker sat down with the president of the United Farm Workers of America, Arturo Rodriguez, to talk about Chavez’s legacy, the continuing movement to better the lives of America’s agricultural workers, and the challenges that remain.

Who was Cesar Chavez?

"Cesar Chavez was a farm worker born and raised in Yuma, Arizona, in 1927," said Rodriguez. "His family lost their farm during the Depression days, so his father took him to California to begin harvesting crops when Cesar was in the 8th grade, forcing him to leave school."

"Cesar worked in the fields up and down California and Oregon for many years until he decided that, based on the injustices and discrimination that took place, it was time to take action. That was in 1962," explained Rodriguez. "So he, along with his wife Helen Chavez and his friend Dolores Huerta, began to do work that was necessary to talk to farmworkers about building an organization to improve their lives and the lives of their families."

How did Chavez organize the farmworkers?

© AP Photo / Michael Dwyer
After Stealing Democratic Election, Corporate Elites Blackout Bernie
Becker observed that, unlike factory workers, where everybody is in the same location, farm workers are dispersed, creating organizing challenges. But, as Arturo Rodriguez explained, there was a solution to that problem; the boycott.

"Cesar Chavez created the boycott, convincing people not to buy agricultural products that weren’t the product of union labor and didn’t have the union stamp," said Rodriguez. Becker remembered protesting in front of grocery stores in his younger years and, for many years after, demanding grocery stores provide union labor products and convincing customers to buy only union-made goods.

How does the Union organize workers now?

© Flickr / Martin
In a Curious Switch, Ku Klux Klan Endorses Hillary Clinton
"We’ve worked with farmworkers with text messaging and Facebook so that we can communicate more rapidly and organize," said Rodriguez. He added that social media has enabled the organization to mobilize in states like California, Oregon, Washington, Idaho, and recently, New York. "We have a big effort in New York trying to get farmworkers for the first time to have the right to organize there."

What is the state of affairs for today’s farmworkers?

Although the state of affairs has greatly improved for farmworkers since the time of Cesar Chavez, Arturo Rodriguez spoke of an ongoing plight and struggle with "much work left to be done."

"We had three workers who died in the past year in the manure lagoons, waste from the cows all put in one particular area and because there are no guard rails around these particular areas, the workers driving the tractors that come close to them end up sliding into those areas and as a result are suffocated because of that," said Rodriguez recounting a particular grievance.

He explained that, in the summer months, particularly in California and the Southwest, there are deaths each year due to heat exposure and a lack of sufficient water or rest breaks.

© Flickr / Gage Skidmore
#CruzSexScandal: #TheThing May Have Legs
Still, Rodriguez remains optimistic about progress that has been made. "Over the past 50 years we have made significant progress ensuring bathrooms in the fields for both men and women, portable drinking water that is chilled so they don’t have to drink from nearby streams or rivers."

Regarding heat exposure, he observes that progress has been made. "We have pushed laws on heat exposure and are working aggressively to ensure that the workers get enough breaks, drinking water, and shade, so that we can reduce the number of heat related deaths."