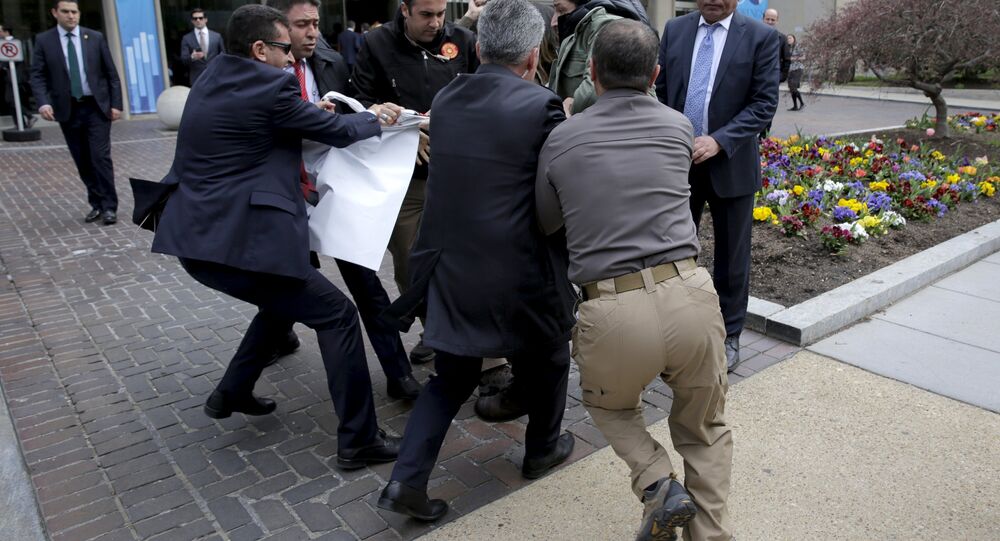 As Turkish President Recep Tayyip Erdogan delivered a speech before the Brookings Institute on Thursday, a largely peaceful protest assembled outside. To quell the legal assembly, the embattled leader’s security detail clashed with journalists, in a scene reminiscent of the media crackdown in Ankara.

In recent months, the Erdogan administration has fought to secure its authority by clamping down on opposition media outlets. Most recently, the Turkish government shuttered Zaman, the country’s largest newspaper, over content critical of the administration.

As Erdogan conducts a five-day visit of Washington DC for the Nuclear Security Summit, he appears to be unable to avoid his authoritarian tendencies.

While the leader spoke at the Brookings Institution, demonstrators peacefully gathered outside, chanting "Erdogan: Terrorist" and "baby-killer," while others carried signs reading "Erdogan: War Criminal on the Loose." DC police struggled to separate protesters from Turkish security personnel.

But that didn’t entirely prevent altercations. Erdogan’s security detail manhandled journalists, reportedly booting one from the building. Other reports suggest that the Turkish leader’s security personnel kicked a protester and threw a woman to the ground.

"We have a peaceful demonstration, they come here and then they threaten us. He used a very bad word he said…we are going to kill you." Kurdish protester Omer Pacl told Sputnik.

"It’s the United States, we have a right to protest…and we have a permit."

Turkish journalist Adem Yavuz Arslan told Sputnik that the Brookings Institute staff allowed reporters inside the building to cover the event, "but Erdogan’s bodyguards, they harassed me, they said many bad things, and they threaten me."

"They didn’t want us to be protesting them, so they started to pull at us. They dragged me," protester Deniz Lohja told Sputnik.

While the incident may be surprising in Washington DC, it’s an all-too familiar scene in Turkey. In 2015, 14 journalists were imprisoned. Two reporters, Can Dundar and Erdem Gul, are currently involved in a closed-door trial, having been charged with espionage for an article in which they accused the Turkish government of providing arms to a terrorist groups in Syria.

In response to Thursday’s incident, the Brookings Institute provided a statement to Sputnik.

"The Turkish security tried to remove somebody, and we overruled it and put him [the reporter] back in," said Joe Clapper, Brookings director of facilities operations. He added that it is "not Brookings’ policy" to remove reporters.

"If you are credentialed, you’re in, unless you do something disruptive."

While the Turkish president had few friends outside his Brookings speech, he does appear to have local support. A pro-Erdogan convoy has been seen circling around the White House. The drivers’ identities are unknown.