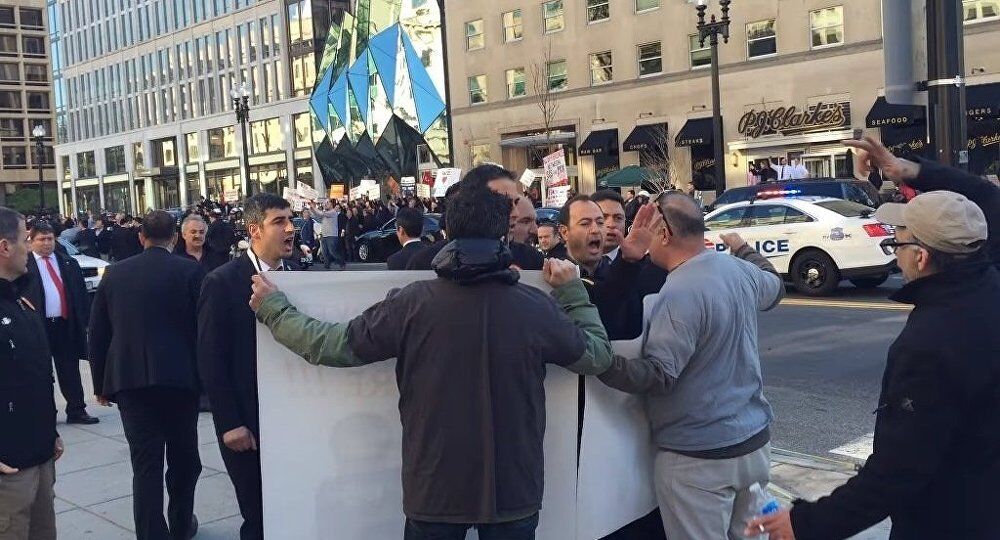 Not everything went well for Turkish President Recep Tayyip Erdogan, who arrived at a summit on nuclear security in the US capital, only to be confronted by a protesters chanting "Erdogan is a terrorist!"

"Erdogan's security tries to silence demonstrators' slogans with their own yelling. Truly, the imagination of these people knows no bounds," twitter user Şahin Aytan tweeted.

After yelling did not seem to work, the security detail began shoving and insulting the protesters, destroying their signs as the police stood idly by.

​Other than detractors, the visit was also attended young men with pre-printed slogans, which said "We [love] Erdogan" and "Erdogan [-] The Man of the People"

In addition, men wearing suits carried slogans "President Erdogan Welcome" and "Protector of Syrian refugees." A young boy was seen with a sign saying "I lov u tayyip <…> TURKS ARE THE BEST [sic]."

Very unusual she's in DC: in front of St. Regis, supporters and protestors of Erdogan yelling at each other. pic.twitter.com/AjgAapSLpG

​The rival groups, which included protesters with effigies dressed in prison robes to symbolize political prisoners, soon clashed, leading DC police to break up the fight.