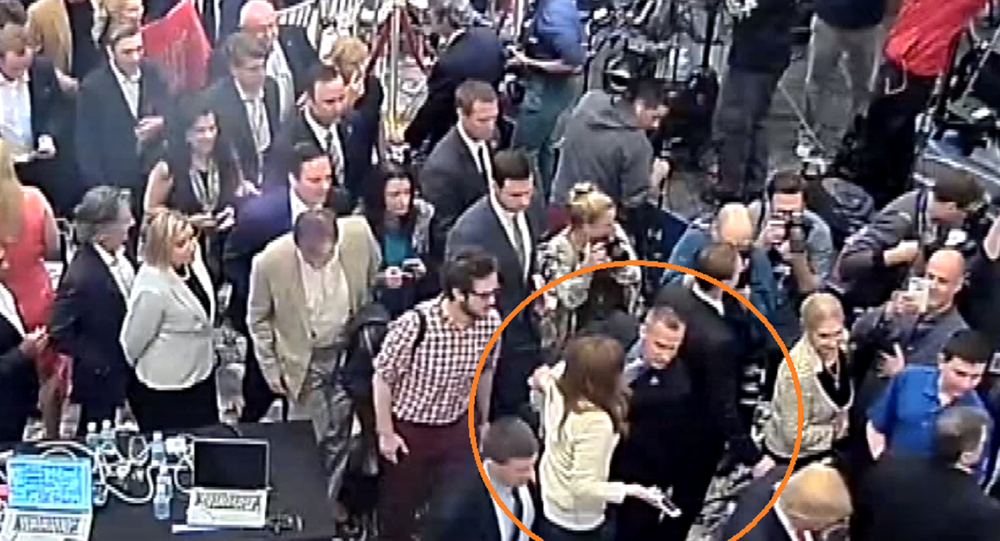 Fields stated that at a March 8 Florida event she was attempting to approach the candidate with a question when Lewandowski grabbed her by the arm and yanked her toward the ground. The claim was backed by a Washington Post reporter who witnessed the incident. Lewandowski denied the charges, referring to the reporter as “an attention seeker.”

Fields responded to disbelievers by tweeting a photo of bruises on her arm, consistent with being grabbed hard. She, as well as three others, quit the pro-Trump Breitbart website following the incident, stating that the outlet refused to take the assault seriously, did not provide support for employees, and only cared about maintaining close access to Trump.

The Trump campaign, including the candidate, maintained that Fields made up the incident. On March 11, Lewandowski tweeted at Fields, “you are totally delusional. I never touched you. As a matter of fact, I have never even met you.”

On Tuesday, the Jupiter Police Department released surveillance footage of the incident lining up with Field’s version of events, as well as a police report.

Following the charges and the release of the footage, the Trump campaign issued a statement defending Lewandowski’s action.

“Mr. Lewandowski is absolutely innocent of this charge. He will enter a plea of not guilty and looks forward to his day in court. He is completely confident that he will be exonerated,” the statement reads.

Candidate Trump took to Twitter to voice his opinion. He also tweeted a screenshot of Fields approaching him, from the same video, asking if he could press charges as well.

A spokeswoman for the Trump campaign, Katrina Pierson, announced on Tuesday that Lewandowski will “absolutely” be keeping his job.

"Everyone knows at these type of scrum events there is some jostling around and some pushing and the second you cross that Secret Service threshold, you will be moved away from the candidate. This is not new," Pierson said. "Corey Lewandowski is going to beat this. He will plead not guilty, and we’ll just have to let this process play out.”

It was reported early on Tuesday that Kendall Coffey, a lawyer representing the campaign manager, resigned as a US attorney in 1996 after running up a $900 bar tab at a strip club and biting a dancer. Coffey was also involved in a high-profile and dramatic Cuban immigrant custody case of a child in 2000. Following media reports of his past, Trump’s denied quickly denied that Coffey would be representing Lewandowski.

Lewandowski turned himself in to authorities Tuesday morning.