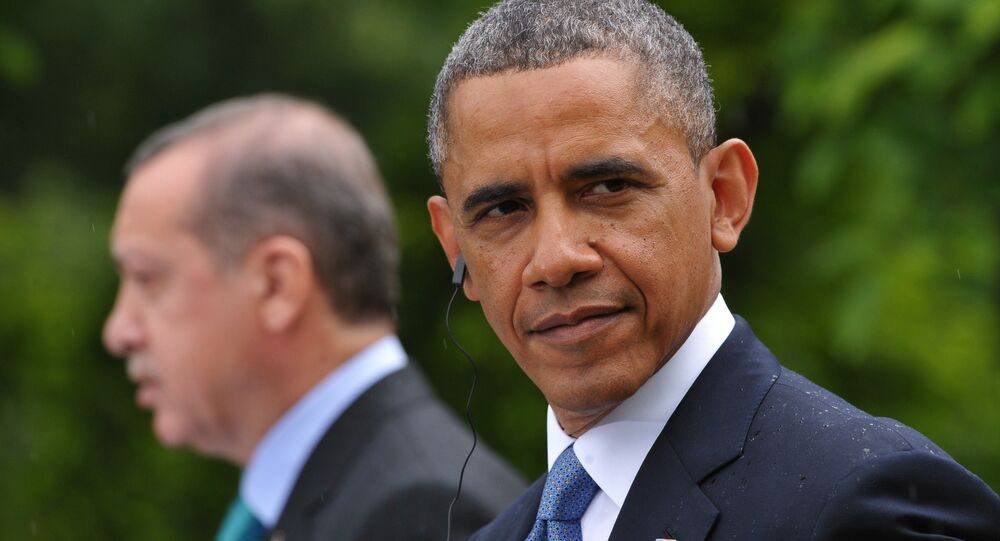 President Barack Obama has elected to not meet with Turkish President Recep Tayyip Erdogan during the latter’s five-day visit to the United States. Radio Sputnik’s Brian Becker speaks with journalist Kemal Okuyan and activist Kani Xulan about the strain between the long-standing two allies.

"Since 2013, the relations between the two countries [US and Turkey] has worsened," Kemal Okuyan, a regular contributor to Turkey’s SoL newspaper, tells Loud & Clear.

"There are mainly two reasons causing this. One is the June uprising in 2013 in Turkey. This was a mass popular uprising against Erdogan. And the other issue is the developments in Syria," he says. "The project, which was based on Erdogan’s dream in Syria, has collapsed."

Vice President Joe Biden’s office released a statement confirming that he will host Erdogan in a meeting on Thursday, and the White House has since indicated that Obama and the Turkish president will have an "informal discussion." Still, the lack of a formal meeting between the two leaders demonstrates a marked change in UK-Turkish relations.

"Unfortunately, the United States feels torn between Turkey and the Kurds," Xulan, director of the American Kurdish Information Network, tells Loud & Clear. "Turkey has the Incirlik Air Base and the Kurds are the boots on the ground, and the US needs both."

"So it wants to use both, if you will, and because of that, Turkey is very unhappy and the relationship has soured."

Erdogan’s violent military crackdown on Kurdish communities in the country’s southeast is also a source of deep disagreement. According to Okuyan, the only solution to the crisis is for Turkish citizens to unite against the administration and policies of the sitting Turkish president.

"We know that the military and the police are very tough and using every means, not only against militants but against the civilian population, but we have to accept that. The only solution for this is to try to unite all ethnic groups," he says.

"If we don’t unite the people then we will face a real civil war."

While Erdogan’s elimination of press freedoms is another source of tensions between the US and Turkey, Okuyan has his doubts that media suppression is the prime motivator for the unrest.

"I think thousands of people are in courts directly because of insulting Erdogan," he says.

"I don’t think in the near future he will change his style because of criticism that comes from the West, because he knows that the West is hypocritical on those issues."

"I don’t really see the future of Erdogan going well," Xulan adds. "He is alienating almost the entire society, if you will. He is acting like a dictator, acting like a sultan.

"I hope the West will come to its senses and take a position against him, too," he says. The US President’s unwillingness to host a formal diplomatic meeting with the Turkish president would indicate that day may not be far off.

Turkey Hopes to Reach Settlement on Cyprus Issue in 2016