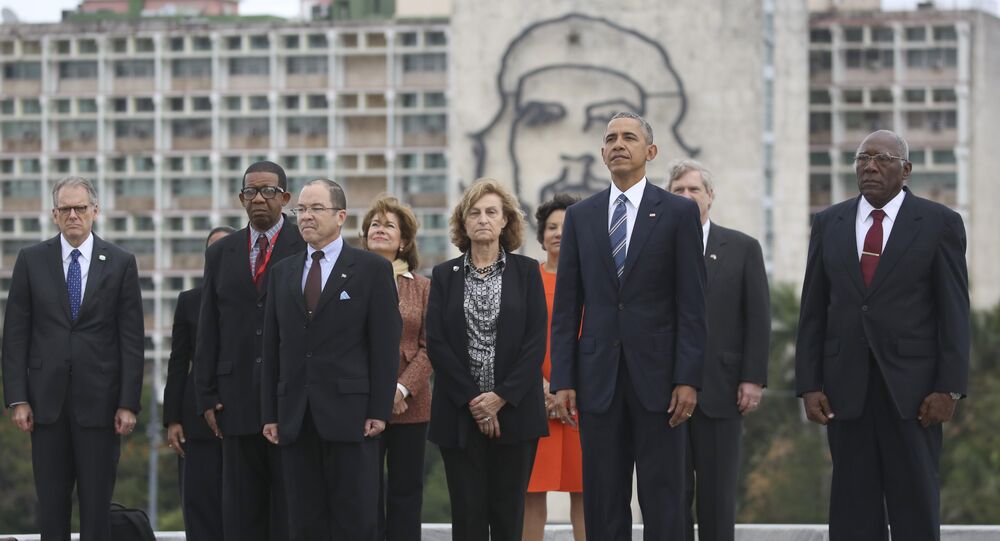 Obama in Havana: ‘A Long Way to Go’ to Normalized Relations

The world awaits the unfreezing of relations after a generations-long feud between Washington and Havana shows signs of ending.

US President Barack Obama is in Cuba for the first visit by a US head of state in 88 years, following the December 2014 announcement that the two countries would start the process of normalizing diplomatic ties.

On Monday, Loud & Clear’s Brian Becker discussed the significance of the visit with Wayne Smith, the Chief of the US Interests Section in Havana between 1979 and 1982; Gail Walker, the executive director of the Interreligious Foundation for Community Organization (IFCO) and Pastors for Peace; and Michael Steven Smith, a Cuban policy expert and host of the nationally broadcasted radio show "Law and Disorder."

Does President Obama’s visit signal a possible end to the blockade with Cuba?

"The US is on the path, but the president cannot lift the embargo, that is up to Congress," explains Wayne Smith. "The Republicans show no interest in lifting the blockade although some parts have been eased. We promised to give back the Guantanamo Naval Base, but we haven’t been able to do that due to Republican opposition. So, I think that we have a long way to go."

Gail Walker agreed, noting that "it is a historic moment and it has been something that we’ve been fighting to achieve, but there are still many egregious aspects of the blockade in effect."

Smith said, observing the unpopular legacy of the longstanding US diplomatic freeze toward Cuba, "The embargo has no popular support in the United States so it is really time for us to recognize the inevitable and also move away from efforts to get rid of the Castro regime."

Is Cuba a dictatorship? Will its people turn against the regime?

"No," explained Walker, "the Cuban People are very astute, very conscious and aware of issues in their country and the world." She said that the people do not see the Castro regime as a dictatorship, in light of economic and social empowerment inherent in the system. "There is a lot of respect and admiration for their country, there is still a revolutionary fervor across the island."

Becker pointed to social advances made by the country as a result of the Universal Declaration of Human Rights, providing for not just political and civil rights, but also for economic, social and cultural rights.

"Lancet Medical Journal, the most respected medical journal in the world, says if Cuba’s advances could be recreated across a range of poor income countries, the health of the world would be transformed," Becker pointed out.

Michael Steven Smith agreed, suggesting that critics of the new deal study Cuban history before condemning the Castro regime. "In 1959, Cuba was a very poor island country without resources. The people living in grass huts, they were diseased, and they died young. That is where they started," he said.

Today, Cuban society is vibrant, despite over fifty year of poverty at the hands of the US economic blockade. "They now have a life expectancy that is about what it is in the United States, 80-81 for women, 76-77 for men. The rate of literacy is almost 100%. Everybody has health care as a human right. They have free education through college and even medical school. They have social rights and they even have elections despite claims of tyranny by Hillary Clinton in her last debate."

Michael Steven Smith suggests that a lot of US officials do not fully grasp Cuban history when lecturing about democracy.

"When somebody like President Obama visits they carry ideological baggage with them because they don’t understand where Cuba started, but here you have this country with crumbling buildings and no new infrastructure or cars, but unlike the United States you don’t see street kids, malnourished faces or beggars, you don’t see people being afraid to walk the streets," he said.

Does Cuba need to reform its practices toward freedom of the press?

The panel disagreed on this point, with Smith observing the need for Cuba to open its society to a more democratic and open process, while Steven Smith observed repeated attempts by US interests to influence Cuba’s internal politics to advance its own cultural and economic hegemony.

© Photo : LiveLeak
Driver is Not a Fan of Trump

Smith stated that while the US should urge Cuba towards democracy, the former has failed to create the conditions to facilitate that. "Our efforts so far, quite frankly, haven’t been all that convincing," said Smith, questioning the sincerity of US intentions to lift the economic blockade.

Steven Smith, by contrast, said that, "The journalists that Castro opposed were controlled by Miami and out of the Cuban Interests Section, so I am not against a multi-party system, but I think what the US is hoping to do is to set up capitalist institutions in Cuba to divide and conquer." He went on to say that the "US wants to create rich and poor Cubans to subvert the Socialist institutions in Cuba, it is a great danger."

"The Cuban government was seen by black Cubans as a great facilitator of advancement with strides made for this once enslaved population greater than just about anywhere," opened Becker.

Walker agreed that the Afro-Cuban population feels a sense of loyalty to the current regime and is well served by a socialist framework that has countered oppression. She worries, however, that "as some of the economic changes begin to take place in Cuba, there will be an ongoing challenge to preserve the gains that have been made for that community."

Will President Obama keep his word to both the American and Cuban people and shut down Guantanamo Bay?

The panelists agreed that the time has long passed for the United States to shut down Guantanamo Bay. Becker observed that the UN has classified the base as a torture center, placing it in contravention to US and international law. All, however, are equally pessimistic about President Obama’s ability to achieve his stated goal of shutting the facility down, as Republican interests continue to to use extraordinary pressure to keep it open.

Smith observed that while President Obama blames Congress, saying they must close Guantanamo and return of the base to the Cuban people, the President has the executive authority.

Steven Smith, by contrast, said that President Obama was "not really the progressive that people thought they were electing" so he says that, while "he could close Guantanamo, he will not do it."

Walker remarked that "the base occupied at Guantanamo is going against the will of the people and it is a complete lack of respect of the unanimous wish of Cubans as expressed for more than 100 years. It needs to be closed and returned back to Cuba."