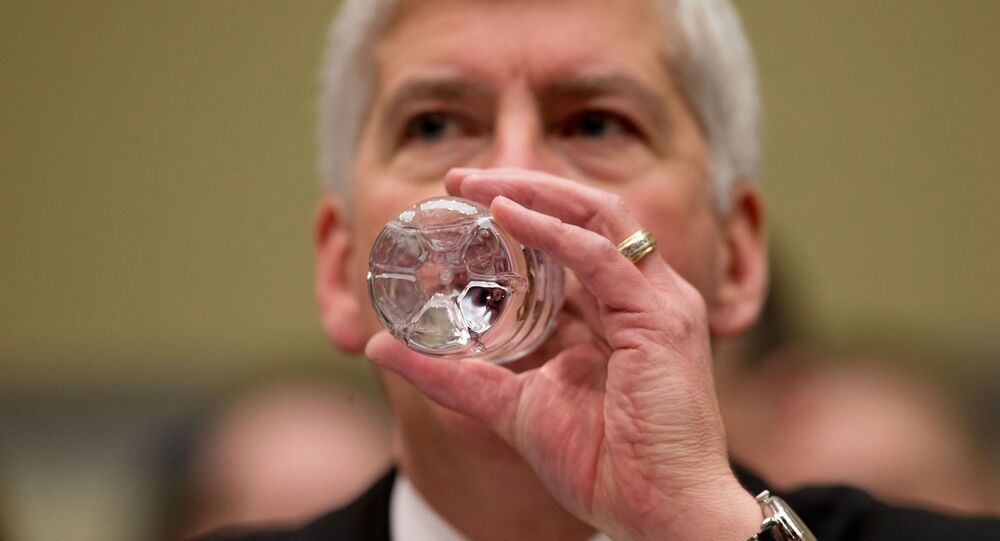 Michigan Governor Rick Snyder has appeared in Washington, DC, for a House Oversight and Government Reform Committee hearing, and immediately came under fire from members of Congress.

Residents of Flint, Michigan, impacted by the lead-poisoned water crisis traveled to DC to attend the hearing and possibly speak to the embattled Governor, but to no avail. During the hearing, Snyder urged the committee to pass a $165 million appropriation for the residents who were poisoned by toxic drinking water.

At the beginning of the hearing, Snyder apologized for the crisis, but defended his administration and its response while deftly shifting blame to Environmental Protection Agency (EPA) administrator Gina McCarthy, also present at the hearing.

"I am not going to point fingers or shift blame; there is plenty of that to share, and neither will help the people of Flint,” Snyder said in a prepared statement. He said, "inefficient, ineffective, and unaccountable bureaucrats at the EPA allowed this disaster to continue unnecessarily."

The chairman of the committee, Representative Elijah Cummings, did not hold back, laying into Snyder and declaring, "the governor's fingerprints are all over this.” Cummings insists that the governor, and not the EPA, are to blame for their failure to act.

"Children will sit in the second and third grade and will not be able to read the words, 'See spot run,' and they won't know why, but the reason why is because there is lead in their veins,” Cummings stated at the beginning of the hearing.

Cummings noted that if a company sold toys laced with lead, and children put them in their mouths, the bosses would be arrested, adding that the same should go for a governor.

© Flickr / Petras Gagilas
‘Federal Law Was Not Followed’: Avoiding Flint’s Poisoned Water Crisis Would Have Cost Less Than $100 a Day

"There's no doubt in my mind that if a corporate CEO did what Gov. Snyder is doing he would be hauled off on criminal charges. The board of directors would throw him out and the shareholders would revolt," Cummings suggested.

Cummings wasn't the only one with strong words for Snyder, as  Representative Matt Cartwright called for Snyder’s resignation.

"Plausible deniability only works when it's plausible," Cartwright snapped.

"I'm not buying that you didn't know about any of this until October 2015," Cartwright said. "You were not in a medically induced coma for a year. I've had about enough of your false contrition and your phony apologies."

"Pretty soon we will have men who strike their wives saying, 'I'm sorry dear, but there were failures at all levels.' … You need to resign too, Gov. Snyder," said Cartwright.

Republican Representative Jason Chaffetz also had strong criticism, recalling an internal email from an EPA administrator stating that she was "not so sure that Flint is the community we want to go out on a limb for.”

"Are you kidding me? Of all the communities out there, Flint is the No. 1 place they should be going out on a limb for. It's depressed economically," Chaffetz said.

McCarthy argued that the EPA was provided with false information from state officials.

"We should not have been so trusting of the state for so long when they provided us with overly simplistic assurances of technical compliance rather than substantive responses to our increasingly growing concerns," she said.

The poisoning of Flint’s water began in April 2014, when the city stopped receiving its supply from Detroit, instead shifting to water taken directly from the Flint River, a source known to have a high corrosive salt content. Corrosive salts in the water damaged the pipes, which contain lead, causing that material to be released into the water, and contaminating it.

In October, the state changed the city’s drinking water source back from the polluted Flint River to the Detroit water system, but warned that the water remains unsafe to drink. Governor Snyder resisted growing calls for his resignation over the scandal.