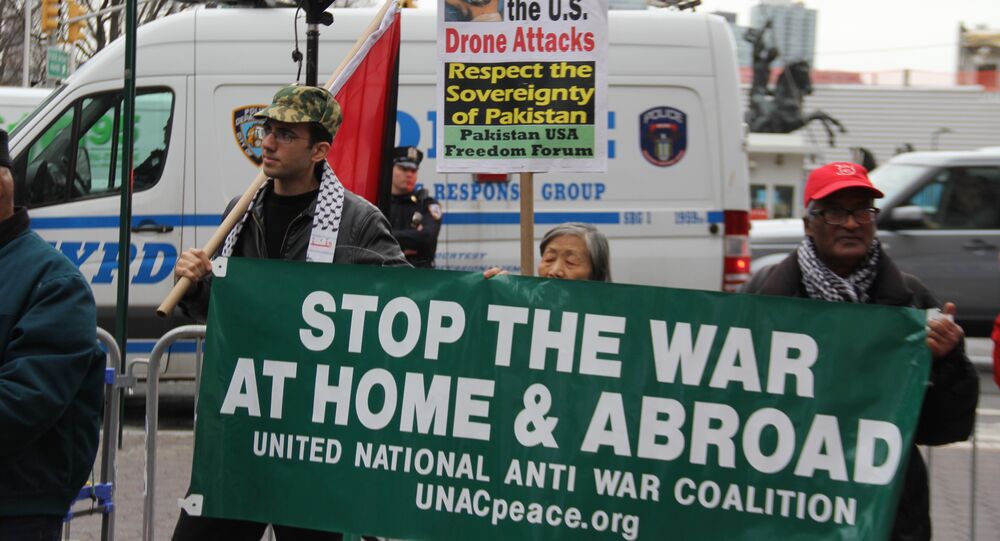 200 Activists Protest in NYC, Call for US to Stay Out of Ukraine, Syria

The United National Antiwar Coalition along with several other antiwar organizations staged a protest in New York Saturday calling on the United States to stop interfering in domestic affairs around the world.

Activists took to the New York City streets Saturday holding signs with various messages including "Stop the US drone attacks," "Stop the War at Home and Abroad," and "Obama, Erdogan, Saudi Royals Sponsors of Global Terrorism." They then marched through the streets of New York until arriving at the United Nations building.

​Speakers took to the stage to denounce American engagement in "unjust" war abroad while failing to do more for Americans at home.

​"None of the candidates in a whole year of campaigning are raising the wars the US is fighting all over the world," Flounders said Sunday. "The cost of those wars comes back home in the most disastrous ways."

​Many of the activists held signs depicting issues from immigration to the water contamination crisis in Flint, Michigan.

​"The life expectancy is actually being lowered, the water in Flint and in Newark, New Jersey is poisoned, the infrastructure is decaying," Flounders added. "We’re saying that there’s a war at home and abroad and its not being addressed so we are bringing together a lot of the issues that aren’t being raised."

​Shahid Comrade of the Pakistan-USA Freedom Forum called on people to come together for peace.

​"Every coming day depends on the peace movement and the peace efforts and the love we show one another," he told Sputnik "Without this, we have no future. It’s every dangerous. Since the second world war, if do not stand up for peace and for each other, we will not have a future."

​Like many of the protesters, he called a Hillary Clinton presidency potentially disastrous.

​"The problem with Hillary Clinton is that if you’re part of the system you can’t take a stand against the dirty game of the billions of dollars sued by the CIA, the FBI and the Pentagon and you can’t serve the common man," he said. "We need to take a stand on principle. We need someone to take a stand on the freedom of speech. Hillary Clinton is not good for the future of the United States and she’s not good for the future of the world."

The rally began in New York City’s Herald Square Park and concluded with a march to the United Nations headquarters.