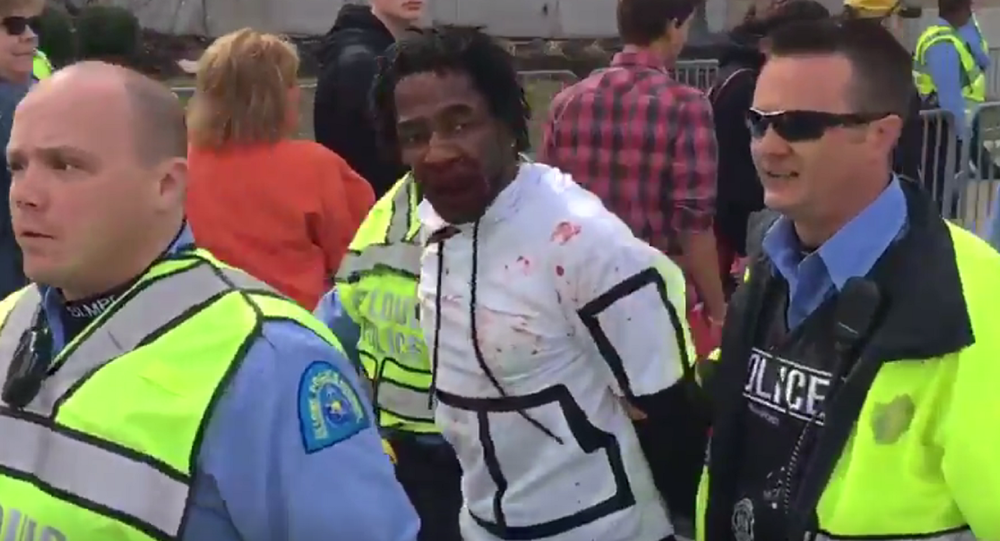 A black Ferguson activist was beaten and bloodied outside a St. Louis rally for Republican presidential frontrunner Donald Trump as the protester used a bullhorn to denounce the candidate’s racism.

The protester, Anthony Cage, became an activist after unarmed black teenager Michael Brown was gunned down by white police officer Darren Wilson in the St. Louis suburb of Ferguson. A video posted after the incident showed Cage with his hands zip tied, being escorted by police to an ambulance.

Junius Randolph, a reporter from St. Louis Today who was present, confirmed that Cage was not arrested despite the restraints. Randolph reported that police Cage go after his wounds were treated, making it unclear why the protester was initially restrained.

Randolph had first reported that two men had been arrested, but it is unclear whether the other person in custody was the alleged attacker.

It remains unclear how the altercation began, but Trump supporters were caught on camera yelling hate speech and assaulting demonstrators.

Some protesters made their way inside the rally at the Peabody Opera House, and the candidate was interrupted multiple times. He reportedly lamented that it was a “shame” that protesters had to be treated “gently” by police.

"And they're being politically correct in the way they take them out," Trump said of the police. "So it takes them a little bit longer. And honestly, protesters are realizing that there are no consequences to protesting anymore. There used to be consequences, there are none anymore, so that's it, thank you very much."

Angelo Carusone, executive vice-president of Media Matters, tweeted that Trump had informed the crowd that he is “currently fantasizing about doing something to protesters, but won’t say what’s on my mind,” causing the crowd to go wild.

Trump stated from the podium, "part of the problem, and part of the reason it takes so long, is, nobody wants to hurt each other anymore."

“Our country has to toughen up!” While a demonstrator was removed from the crowd. "They're allowed to get up and interrupt us horribly and we have to be very gentle. They can swing and hit people, but if we hit them back, it's a terrible thing."

St. Louis Police Chief Sam Dotson confirmed that at least 35 protesters were removed throughout the duration of the rally.

After a black protester was sucker-punched by a white Trump supporter and caught on camera, Trump stated at a press conference that, "the audience hit back, and that's what we need a little bit more of,” encouraging violent behavior at his events.

The man who cold-cocked the unsuspecting protester while the latter was being led away by security was quoted later as saying, “next time, we might have to kill him.”