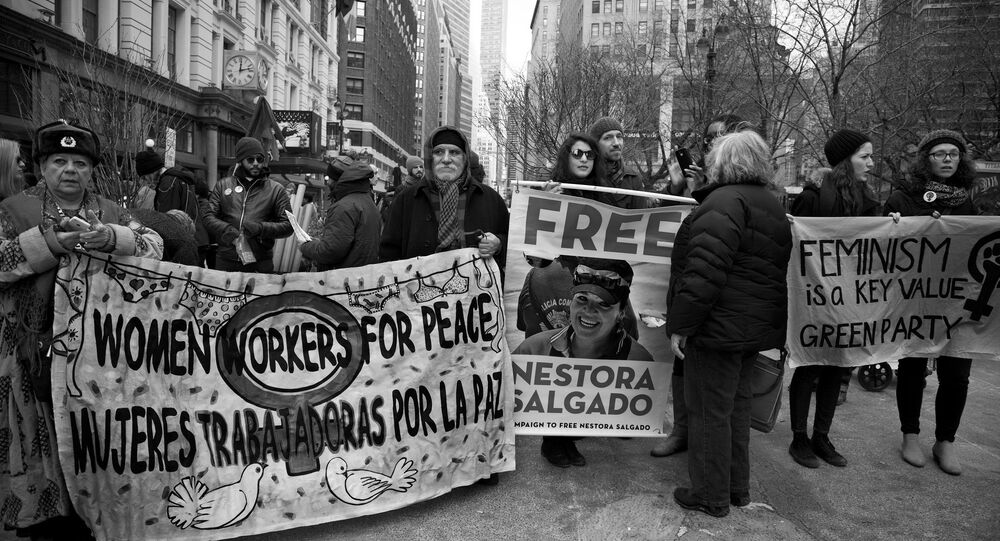 Socialist Roots: Why International Women’s Day is Ignored by the US

This is not the only time that Americans have allowed human rights struggles to be sanitized away.

​Loud & Clear’s Brian Becker sits down with feminist activist Jane Cutter, editor of LiberationNews.org, to discuss why International Women’s Day and May Day were banned in the United States for generations and why, even today, the US refuses to make this day of female empowerment a national holiday.

International Women’s Day started in the US, but it is only a national holiday in other countries. Why?

"The earliest women’s day observation took place on February 28, 1909, in New York City," explains Cutter, "and it was organized by the Socialist Party of America to commemorate a strike held a year earlier by the International Lady’s Garment Workers Union. This was called Women’s Day."

The American holiday inspired women around the world. In 1910, at the International Women’s conference in Copenhagen, German women at the meeting proposed adopting the American holiday as a worldwide holiday – the vote was seconded by Marxist thinker Clara Zetkin. One year later, on March 19, 1911, over 1 million people in Europe observed the first International Women’s Day.

The 1909 mobilization by women’s workers was prior to women’s suffrage in the US?

"Yes, women didn’t have the right to vote in the United States until 1920 with the ratification of the 19th amendment" said, Cutter, "and there was a very militant movement for the vote, the suffragette movement, at the same time that there was struggle by women for their rights in the workplace."

It was economic rights and working conditions, rather than political rights, that were first commemorated in 1909. The protests and holidays emerged from the Triangle Shirtwaist factory tragedy. The immigrant workers in that factory, as Cutter explained, "all burned to death in that fire because the bosses literally locked them into the factory leaving them no way to escape."

Why did the US purge International Women’s Day from political and academic literature?

In 1917, years after Russia adopted an International Working Women’s Day, the country’s women went on strike for bread and peace, Cutter notes.  These women "sparked the February Revolution" that led to the toppling of the Russian monarchy.

Leon Trotsky wrote, "23 February was International Women’s Day and although meetings and actions were foreseen, we never would have imagined this day would inaugurate the Revolution."

Trotsky went on to write that "in the morning, despite orders to the contrary, textile workers left the factory and sent delegates to ask for the support of the protest leading to mass strikes in the streets."

US recognition of International Women’s Day was revived by grassroots activists, right?

"Yes, it was revived in 1970 in New York City by Socialist women who protested outside the women’s house of detention in Greenwich Village, New York, demanding freedom for women prisoners," said Cutter. "There were many prominent activists including African American attorney Flo Kennedy who talked about her work to repeal anti-abortion laws three years before Roe v. Wade made it a right."

Wasn’t the 1970 protest for International Women’s Day initiated by a radical socialist group?

The protest was initiated by women from a very radical youth group, Youth Against War and Fascism, that had strong socialist ties, Cutter confirmed. Recognition of the day "spread across the country and, even though it is not a national holiday, it is nonetheless recognized throughout the US."

However, the day’s true meaning and its interconnectedness with the struggle of women workers has largely been lost in cultural sanitization. "It is recognized through the United States as sort of a community celebration or community event."

The modern American conception of the day has “many different flavours,” according to Cutter. "In 2016, the meaning ascribed to the day ranges from militant, radical, socialist-oriented or at least generally radical feminism to things that are more ‘liberal’ in their orientation – ‘let’s celebrate women, let’s talk about women heroes and accomplished women,’" she said.

The day lost its connection to the struggles that women face, a struggle that is all too real in a country where Latino women only make 54 cents on the dollar compared to their white male counterparts. Instead, Cutter says, "some people talk about March being an unofficial women’s history month in parallel to February being Black History month." The motivation for the action the day once called for has dissipated.

Is the American phenomenon of sanitizing International Women’s Day comparable to May Day?

"Yes, these holidays were really seen as Socialist holidays for worker militancy and this associated with the enemy state, the Soviet Union, that was highly demonized," said Cutter.

May Day, or International Worker’s Day, also started in the United States but is no longer recognized. It found root in the "movement for the 8-hour workday in 1884 when the American Federation of Labor, at their fourth convention, passed a resolution calling for it." At the time, the apex of the industrial revolution, men and women worked 14 hours per day, leaving no time for any other activity besides sleep.

A brutal struggle was waged between workers and industrialists "where people were killed, people were framed upon unfair charges, and workers were executed for their participation," Cutter pointed out.

This movement culminated into the historic Chicago Haymarket Riot on May 4, 1886. On that day, a saboteur ignited a bomb in the middle of a crowded protest leading to fighting between protesters and police that left seven dead – four police officers and three workers. The movement’s leaders were executed one year later.

The day that became May Day or International Workers Day was not only a general recognition of workers’ rights and contribution but also was intended to commemorate the Chicago riots.

Like with International Women’s Day, the US moved to sanitize the socialist influences of the movement against oppression by creating an entirely separate holiday, Labor Day, which is bereft of any historical relevance.

Russian women to use men as chess figures on Women's Day