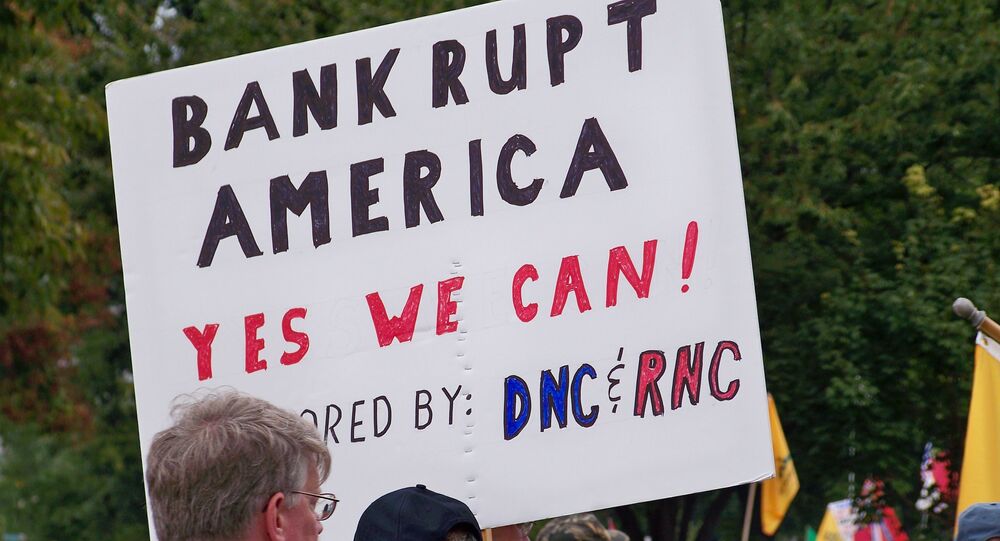 Amid official economic statistics that claim “the world’s largest paper economy is in a marvelous recovery” and the insistence of leading US economists that the national debt doesn’t matter as it is owed to itself, geopolitical analyst F. William Engdahl argues that the country is almost bankrupt and its end could be nearer than any of us imagine.

© AP Photo / Richard Drew, File
Back to 2008: US Energy Bankruptcies Hit Crisis Level in Q4
F. William Engdahl has refuted the claims of leading US economists, including Noble Economics Prize winning Paul Krugman, that debt in an economy, especially the world’s most debt-bloated economy, the United States “doesn’t matter,” as it, to a large extent, owes money to itself.

“Today the US financial economy is going into a new downward spiral led by debt,” the geopolitical analyst, who is also a strategic risk consultant and lecturer with a degree in politics from Princeton University, writes in his article for the New Eastern Outlook.

The author elaborates that indebted American consumers are the main reason for such a pathetic state of the country’s economy.

© AFP 2020 / ALEXANDER NEMENOV
Why American GDP Won’t Matter in a War With Russia
“Just because the Federal Reserve has a zero interest rate policy doesn’t mean Chase or other Visa card issuers charge zero. They still charge from 13% to 25% depending on the credit history,” he writes.

“Total consumer debt today is a staggering $11.91 trillion, almost 70% of GDP. It is even worse than the bare statistics.”

The American household is forced into debt increasingly because the rise in the cost of living has exceeded income growth over the past 12 years.

Median household income has grown 26% since 2003, but household expenses have outpaced it significantly — with medical costs growing by 51% and food and beverage prices increasing by 37% in that same span.

The average US household, the author says, pays a total of $6,658 in interest cost on home, cars, credit card debt per year, 9% from an average household income of $75,591.

© CC BY-SA 2.0 / Elliott Brown / Debtor's Prison & Dark Cells
Utah Man Dies in Prison for Unpaid Medical Debt
“That is being spent on interest alone, not on new shoes for the kids or dining out with the family. This is the real reason the Federal Reserve is in a gigantic pickle regarding raising interest rates to “normal” —it would blow up the near $12 trillion consumer pyramid of debt along with corporate debt,” he further suggests.

There is another source of debt, the geopolitical analyst says, which is “assuming alarming dimension.” And that is student debt, “a new factor that 25 years ago was almost negligible.” Today students must borrow to finance college.

And the statistics are alarming.

“Today total outstanding student loan debt in the US is $1.2 trillion. Only home mortgage debt is higher,” the author says.

“About 40 million Americans hold student loans and about 70% of bachelor’s degree recipients graduate with debt.”

© Blogger photo.
The Next American Crisis: Student Debt
Those who graduated in 2015, he explains, left college owing an average of $35,051 before earning their first paycheck to pay that debt off. One in four student loan borrowers are either in delinquency or default.

The consequences of such a high number indebted American consumers unable to make their payments are being experienced in many branches of economy.

“A further indicator of the true state of the US debt-bloated economy is the fact that the world’s largest retail group, Walmart, just announced it will close 154 of its giant stores that sell everything from food to garden equipment to toys,” the author notes.

Over the past two years hundreds of America’s giant shopping malls have been abandoned as store chains like J.C. Penney, Kmart, RadioShack and Sears close thousands of outlets.

© Sputnik / Boris Babanov
Plummeting Oil Prices Force Big US Shale Players to the Wall
Even worse, many companies are continuing to file for bankruptcy.

“With the most severe collapse of oil prices in 13 years, the last remaining job-creating sector of the economy, the oil and gas industry, is rapidly becoming the domino that threatens to topple a mountain of dicey credits and threaten many banks,” F. William Engdahl says.

“Since the deal between the foolish US Secretary of State John Kerry and Saudi King Abdullah in September, 2014 to flood the world with cheap Saudi oil to create a crisis in the Russian ruble amid US sanctions, the worst hit in the unfolding crisis has been the US oil and gas industry, mainly unconventional, costly shale oil and gas,” he elaborates.

They have sold off hundreds of oil fields, eliminated an estimated two hundred fifty thousand jobs and slashed billions of dollars from capital spending and stock dividends, he adds.

© AP Photo / Bob Bird
US Coal Giant Files for Bankruptcy as Shift to Natural Gas Continues
“With jobs in the oil and gas sector vanishing, companies going bankrupt, households choking in debt, real unemployment is not the mythical 5% declared by the US Labor Department but more like 23%, the author states, citing John Williams’ Shadow Government Statistics.

With all the above in mind, he concludes, it is no wonder that the “American Hegemon is going bankrupt.”

“Debt is a strategic factor in the existence of any national economy, and has historically been the factor that ruins nations, the United States included,” he finally states.

Raising Public Debt Will 'Turn Into Catastrophe for US'