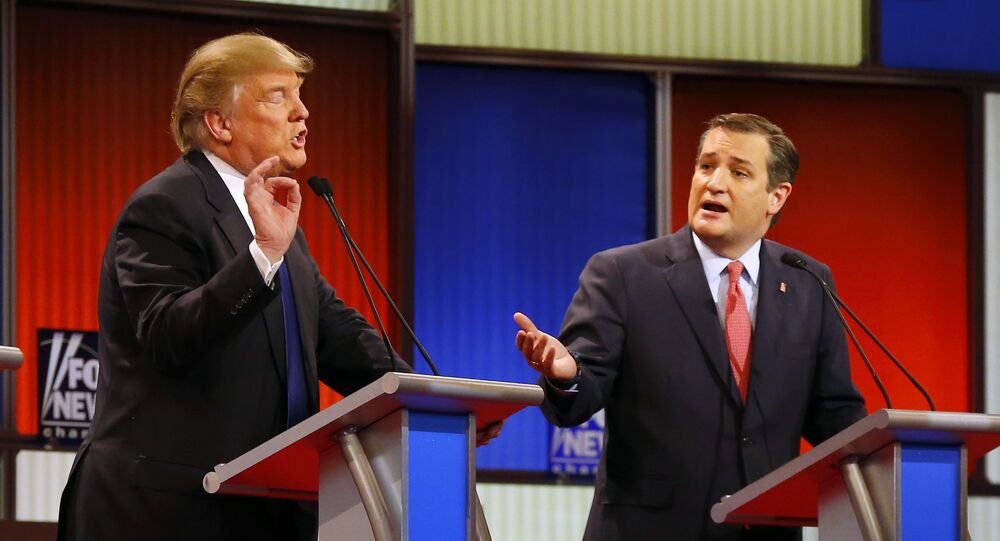 WASHINGTON (Sputnik) — US Republican presidential hopefuls Donald Trump and Ted Cruz claimed two victories each, while Hillary Clinton further cemented her lead in the Democratic race over her rival Bernie Sanders at Saturday caucuses and primaries in five US states.

© AP Photo / Michael Dwyer
US Senator Bernie Sanders Wins Democrats' Primary Vote in Kansas, Nebraska
In Kansas, US Republican Presidential hopeful Senator Ted Cruz has scored 48.2 percent of the votes, while his main rival Donald Trump, who successfully performed at the Super Tuesday, secured 23.3 percent. Sen. Marco Rubio received the support of 16.7 of voters, and John Kasich, the governor of Ohio, got 10.7 percent.

Despite his victory in Louisiana and Kentucky, Trump failed to secure more delegates' votes in total than Cruz, who also won in Maine.

Former US State Secretary Hillary Clinton won only one but the largest state out of three, Louisiana, which allowed her to beat Sen. Bernie Sanders in total delegates' votes.

Cruz and Sanders still have good chances to continue the presidential race, while Rubio, who failed to win or secure the second place in all states, has now less chances to become Trump's main rival.

Cruz's victory in the Kansas caucuses became the fifth for him as he previously dominated in Iowa, Oklahoma, Alaska and his native state of Texas.

A presidential hopeful has to secure at least 1237 delegates' votes to become a candidate from the Republican party. According to the New York Times' estimates, Trump has 373 votes, while Cruz, Rubio and Kasich have 291, 122 and 33 votes, respectively.

Clinton has counted on a large state, Louisiana, with 59 delegates at stake, and subsequently won it, gaining more than 70 percent of votes.

In Super Saturday's total, preliminary estimates show that Clinton has 65 delegates' votes, while Sanders has 42.

After Saturday's voting, Clinton has 1,117 delegates versus Sanders' 477. The presidential hopeful has to win 2,383 votes out of 4,764 to become a candidate from the Democrats.

US Presidential Hopefuls Try to Use Snowden's Name as 'Bargaining Chip'

US Presidential Race: Are the Kings of the Road Dethroned?