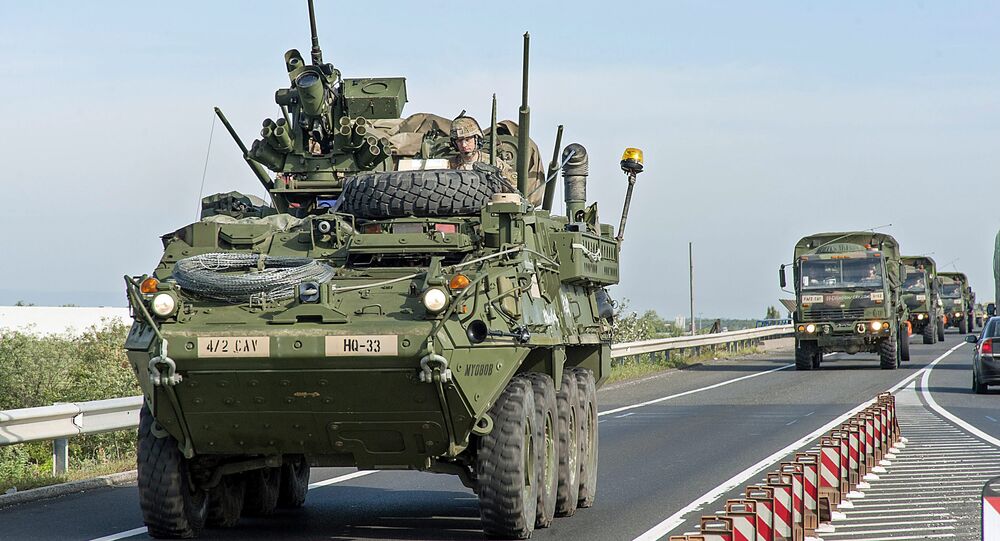 US President Barack Obama is pushing for a significant military increase in Eastern Europe, citing fears of Russian "aggression." As American authors Lawrence Korb and Eric Goepel point out for Defense One, the plan is wasteful and an unnecessary provocation.

"…The [US] Department of Defense has fallen back on a tried-and-true Cold War boogeyman: the threat of Russian aggression against allies in Europe," Korb and Goepel, both with the Center for American Progress, write for Defense One.

"Obama just asked Congress to fund the biggest military buildup by NATO in Eastern Europe since the Cold War," Korb and Goepel write.

"A NATO buildup of this magnitude also neglects to take into account just how provocative such a move would be; by concentrating troops on Russia’s border, we are playing into Putin’s long-standing criticisms of NATO encirclement."

The article also points out the absurdity of thinking that Russia has any interest in invading a NATO country.

"Claims that any NATO member is at risk of Russian invasion is a flawed reading of recent history," they write. "…The idea that [Russian President Vladimir Putin] would risk a war with NATO is ridiculous on its face."

Citing Russian "aggression" has more to do with justifying the Pentagon’s exorbitant budget, especially since that money could be put to better use.

"The Defense Department is inflating the threat Russia poses, which allows the Obama administration, senior military leaders, and supporters in Congress to justify maintaining the historic highs in defense spending, which in real terms is now more than the US spent during the Cold War," Korb and Goepel write.

"Billions that go to support placing more equipment in Eastern Europe and putting an armored brigade on rotation are billions that cannot be spent retraining US workers or rebuilding America’s failing infrastructure."

Also included in the new budget is a massive $1 trillion upgrade to the US nuclear weapons stockpile. Despite being a breach of the Non-Proliferation Treaty, the program is deemed necessary in light of, once again, imagined threats of Russian aggression.

© AP Photo / Charlie Riedel
All About Russia After All: Washington’s Vow of No New Arms Race Exposed

"We are countering Russia’s aggressive policies through investments in a broad range of capabilities…[including] our nuclear arsenal," the budget reads.

"The United States is on the cusp of launching an unnecessary, expensive, and potentially dangerous plan to modernize its strategic nuclear forces," Professor Gordon Adams and Richard Sokolsky write for Defense One, "helping stimulate what is being called a 'new nuclear arms race.'"