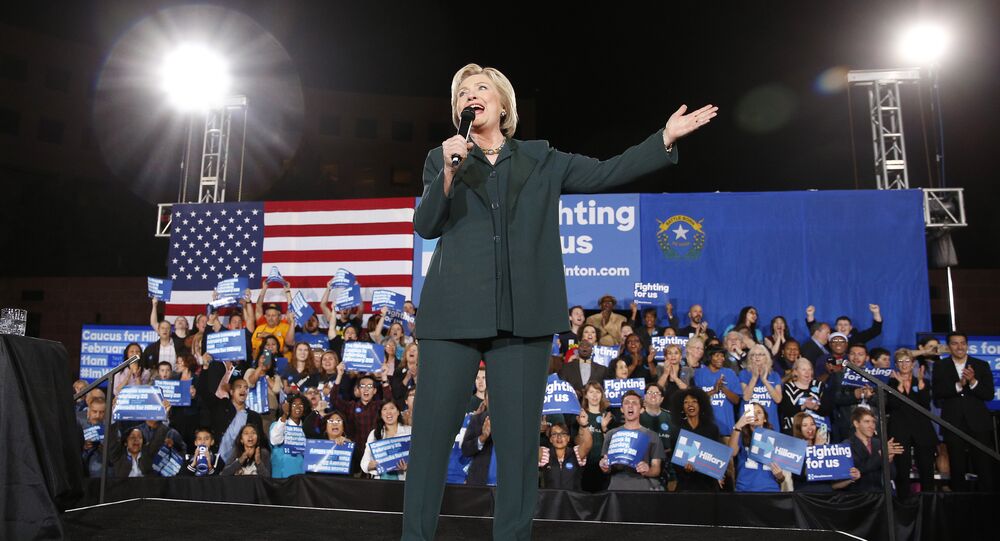 Much of the US media has presented Hillary Clinton’s victory in the Nevada caucuses on Saturday as by a wide margin, although she won by just four delegates, and despite the fact that five weeks ago Sanders was down by 25 points in the polls.

According to leading members in two independent socialist parties in the US, the American ruling circle fears that Senator Bernie Sanders is a threat to Clinton and is doing everything to slow his momentum.

The outcome of the Nevada caucuses was in fact very close, and Clinton barely survived a surge of support for Sanders, winning the caucus delegate contest 19 to 15. This is more of an impressive comeback rather than a smashing defeat for Sanders, especially taking into account that he was 25% behind in the polls just a few weeks ago and that he received over 80% of the youth vote.

However, mainstream media reports trumpet that it was a big win and a smashing night for Clinton, as if Sanders' momentum was already broken.

"I think it's very remarkable, despite the liberal corporate media being very much for Hillary Clinton," Gloria La Riva, 2016 presidential candidate of the Party for Socialism and Liberation, told Loud & Clear's  Brian Becker. "The democrats on the other hand are doing everything they can with their superdelegates, with the media coverage…All the media is saying she [Clinton] won really strongly in Nevada, which is not true."

According to La Riva, the main reason for the media games is a threat coming from Sanders, of the specter of socialism. She opines that he is "re-popularizing issues that were never even on the lips of any candidate in the last 30 years," including free public education, strengthening a student movement that is now "on a roll and is not going to stop," even if Clinton receives the nomination.

Members of the corporate, financial and economic elite feel threatened, she asserts, because calls for reform could actually become reality, instead of the return to somnambulance that normally follows elections.

"The expectations will be raised highly if Sanders were to win, that's part of the reason why they don't want him to win," La Riva said.

© AFP 2020 / JEWEL SAMAD
US Democrats Clinton, Sanders Face Off in Nevada Caucuses
With his a liberal view and a call to action, Sanders has won an overwhelming youth vote, a movement seen as challenging for the establishment currently represented by Hillary Clinton. According to La Riva, Sanders is also receiving increasing support from unions. It is of particular interest that the AFL-CIO (The American Federation of Labor and Congress of Industrial Organizations) refused to take an early vote, "which they normally would have done for someone like Hillary Clinton," instead leaving individual unions to decide for themselves.

Reportedly, Hillary Clinton's Nevada victory over Bernie Sanders was helped by a tie breaker in a single precinct. In Las Vegas fashion, ties are settled with a deck of cards, and Clinton was said to have drawn a "lucky" ace, winning one delegate.

"As far as I'm concerned, it's just a sham," Stewart Alexander, the 2012 presidential candidate of the Socialist Party USA, told Radio Sputnik. "This needs to be challenged. The whole electoral process in this country is a fraud."

The same night that Clinton was squeaking past Sanders in Nevada, Donald Trump handily won a Republican primary in South Carolina. According to Alexander, the success of the Trump candidacy can be explained by an American exhaustion with endless wars.

"The war on terror… is a creation of US imperialism," Alexander said. "People have gotten so exhausted with this war on terror; we have created this evil presence throughout the globe."

© AP Photo / Carolyn Kaster
Sanders Claims to Recoup at Democratic Presidential Nomination Despite Nevada Caucus Loss
Alexander suggests that US citizens want to vote for someone like Trump, because he promises to "make America great again" and "protect the southern borders." But like Reagan, and many other candidates before him, who have read from the same playbook, the rhetoric is only relevant until the ballots are counted.

La Riva suggested that Sanders would do much better in a confrontation or a debate with Trump than would Clinton.

"Bernie Sanders has a better chance against Trump, or Rubio, or Cruz, than Hillary Clinton does," she said.

Sanders Leads Over US Republican Presidential Candidates in National Poll