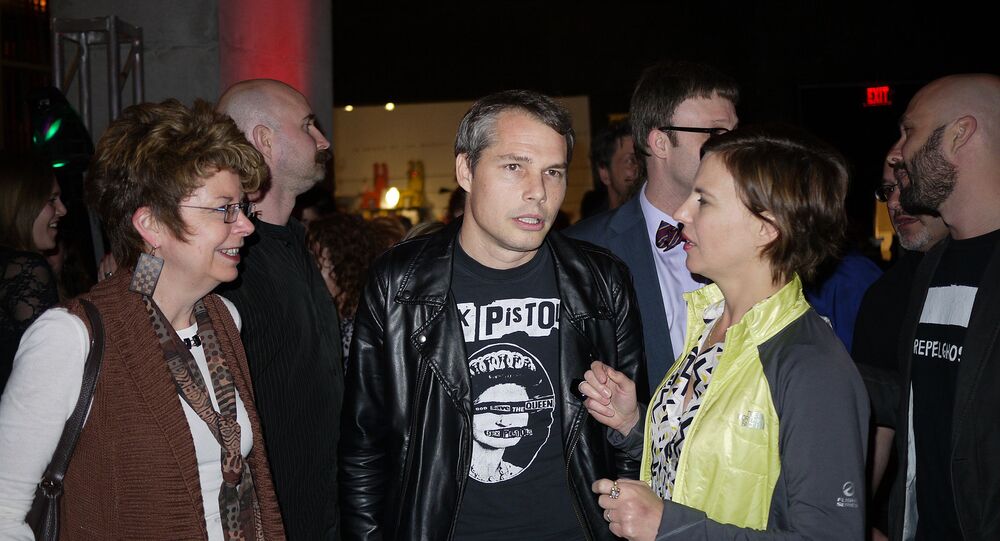 As the US presidential campaigns gain momentum, activists nationwide are getting in on the act in support of their chosen candidates. A designer who created an iconic image for the Obama campaign has struck again, this time for Bernie Sanders.

Designer and activist Shepard Fairey, known for the  "Hope" image he created for Senator Barack Obama's 2008 presidential campaign, has now produced new images emblazoned on t-shirts in support of the Vermont senator and his run for the Oval Office.

"I'm supporting Bernie Sanders because I want to push principles, not personalities," Fairey said in a Bernie Sanders campaign video posted to Twitter.

The artist stated that his new design, without a recognizable face, focuses on "images about people of substance."

"I'm tired of portraits," he remarked. "I want to make images about people of substance, about the issues they care about."

Acclaimed artist and actvist Shepard Fairey has a new design in the Bernie Store: https://t.co/TeOfYwtwWohttps://t.co/i9RIoz9AsO

The somewhat busy new graphic image depicts several motifs, including Sanders' famous ‘Feel the Bern' slogan, along with other pieces of text stating ‘a political revolution' and  ‘a future to believe in.'

© Sputnik / Cassandra Fairbanks
Sanders: Clinton Using $500,000 in Wall Street Cash to Buy Campaign Ads
The designer's endorsement includes a statement regarding Sanders as a candidate who "embodies the principles of justice, equality, liberty and access to the American dream."

Fairey's endorsement claims to speak to the ‘ordinary man' and is made in support of and endorsed by Democratic frontrunner Sanders' campaign, touting the slogan: "Paid For by Bernie 2016 (not the billionaires)."

Largest US Peace Group Endorses Sanders for President Over Clinton