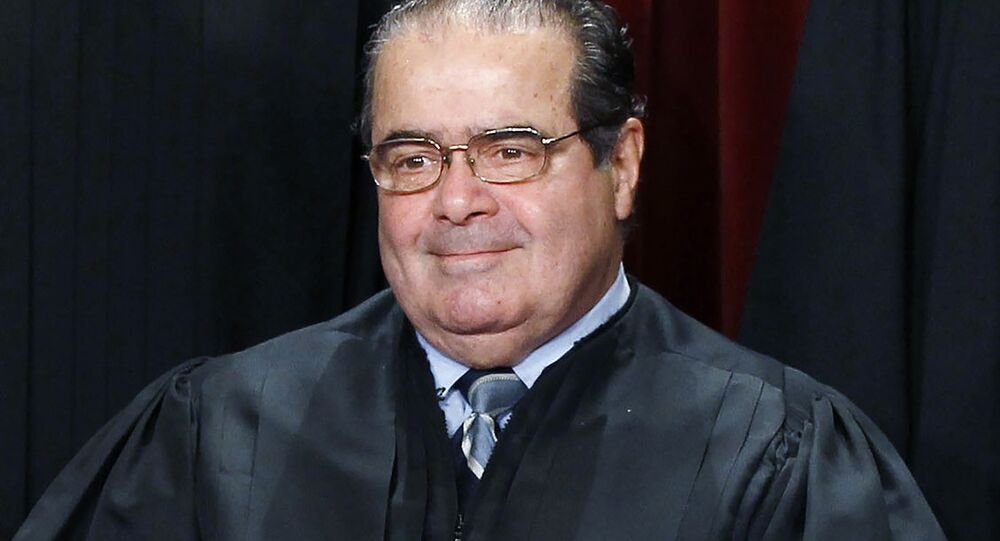 US Supreme Court at Risk of Gridlock

The Republican Party announced that they will unilaterally reject any Supreme Court Justice nomination by US President Obama, following the death of Antonin Scalia over the weekend. Civil liberties attorney and constitutional law expert Mara Verheyden-Hilliard told Radio Sputnik that this may bring the highest court in the country to a standstill.

US Supreme Court Justice Antonin Scalia, the dominant conservative voice on the high court for 30 years, died on Saturday at the age of 79, leaving President Obama the task of nominating his replacement.

© Flickr / C Hanchey
US Supreme Court Vacancy to Dominate 2016 US Presidential Election
Verheyden-Hilliard told Radio Sputnik that Scalia had an enormous impact on the court during his tenure. As an extreme conservative, he was particularly known for his use of the concept of "originalism," in which "the court turns back to those times in which the constitution was written and [takes into account] the ideas in the minds of the men who wrote the constitution".

Those times in which the US Constitution was written included outdated social mores, such as women not having the right to vote, the enslavement of a majority of black people on the continent, and indigenous people were not considered to fully be men capable of coherent thought. Decisions are thought to have been made based on "what was in the hearts and minds of slave owning, property owning white men when the constitution and the Bill of Rights were originally written."

A Supreme Court Justice is appointed for life, and thus the selection of a new member is often considered "the most significant, compelling part of any presidency."

"When a president can put into place a Justice that bends one way or another way, that is going to have an impact for decades to come on the future of the country" Verheyden-Hilliard said.

If Republicans are able to block Obama's nomination, it could serve to determine the outcome for several major, defining cases, in key areas of American life, involving women's rights, immigration rights, and labor union rights.

"Where the court would perhaps have ruled 5/4 at the conservative favor, it would now be 4/4, and there would not be a definitive ruling. Then generally what happens is that the case… defaults back to the final ruling by a lower court. Although, were there in fact to be another nominee…who would take the bench, the court could also ask to rehear the cases it's already heard this term with that new Justice in attendance."

© AP Photo / Martin Meissner
US Supreme Court Halts Obama Administration's Carbon Emissions Plan
According to Verheyden-Hilliard, that Republicans would "violate their constitutional obligations to hear and go through the process of hearings for the sitting of a new justice" shows that there's "a complete unwillingness at this point to do anything."

"It's a significant change in the way that the government is operating over recent years," she suggested. "Politicians, and the Republicans more notably, are willing to say anything and do anything, to go as far out as they possibly can go to score political points. All they are doing on a daily basis is weighing what they can get away with."