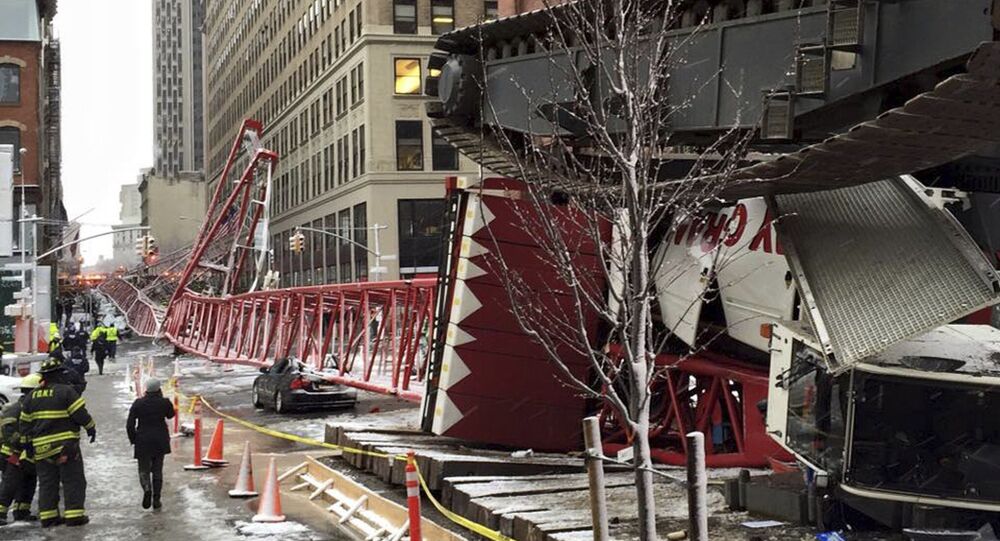 NEW YORK (Sputnik) — According to the New York City Fire Department, one person was found dead at the scene and three people are being treated for non-life threatening injuries.

"There’ve been gas leaks as a result of this incident," de Blasio stated, noting that buildings physically affected by the crane collapse have been evacuated.

Need better crane safety. This was a crane in midtown yesterday #cranecollapse pic.twitter.com/dAN35NAlsJ

The crane collapsed at 8:22 a.m. EST (12:22 p.m. GMT) at the corner of Worth Street and West Broadway, approximately half a mile north of the World Trade Center.

The 565-foot-long crane was in the process of being secured because of inclement weather when the collapse occurred, de Blasio explained.

"The crane was being lowered into the secure position," he said.

As a precaution, the New York City Department of Buildings has ordered all cranes of similar or larger size to remain inactive for the remainder of the day. This was the first major crane collapse in New York City since 2008, according to de Blasio.

Over 100 Firefighters Working at Scene of Crane Collapse in Manhattan