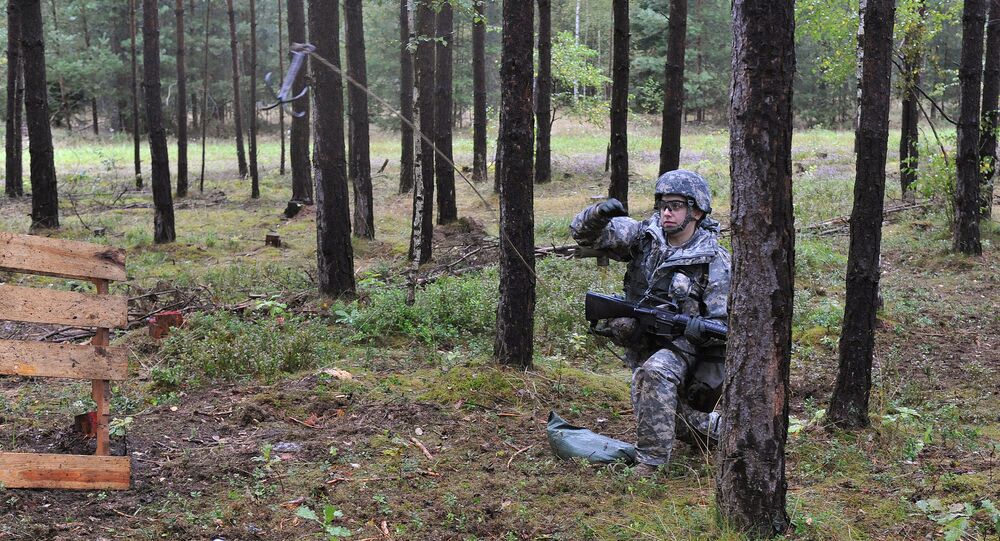 While Europe and the US are awaiting Russia’s reaction to the US' proposed plan to quadruple its military spending on its European presence, American media is speculating whether the proposed measure is a genuine commitment to rebuilding or more of an “effort to send signals” to Russia, and, what is more interesting, to China.

Speaking to the Economic Club of Washington on Tuesday, US Defense Secretary Ash Carter gave a preview of what remains by far the largest military budget in the world.

© AFP 2021 / STAFF
Feeding the Beast: Understanding the Pentagon's Plans to Quadruple Its European Defense Budget
He reshaped the country’s spending priorities, tilting the focus to what the US military has defined as its five big challenges: Russia, China, North Korea, Iran and the Islamic State.

Carter announced that the Pentagon would ask for $3.4 billion in 2017 to boost its military presence, training and exercises in Europe, which is a fourfold increase over the previous year.

The move is aimed at reassuring European countries “concerned about Russia.”

The European and American media jumped at the chance to speculate on Russia’s probable reaction. And while Moscow has taken a time out in order to respond, here is what some experts have suggested.

© AFP 2021 / Guadalupe M. Deanda III / USMC
Flat-Footed Army: Why US is Unable to Defeat Russia, China and Daesh
The spending increase is apparently intended to support greater US deployments in eastern and central Europe by expanding the equipment stationed there and by rotating American troops in order to maintain, at any given point, the equivalent of a full armored combat brigade in the area.

However, an expert in foreign relations, Nikolas K. Gvosdev thinks that the measure is unlikely to change anything on the ground.

Even though some of the Eastern European countries have praised the Pentagon's decision, most European states have not committed to undertaking even modest increases in their defense spending, he says, despite all the worry about an “imminent Russian threat.”

“A US announcement of increased defense spending for Europe that is met in European capitals with sighs of relief that the American cavalry is returning and is not met by concurrent increases across the board in Europe (or even provides cover for further cuts) will end up minimizing its impact,” he writes in his article for The National Interest magazine.

© AP Photo / Ronald Zak
Russia to Adopt 'Compensating Measures' in Response to US Military Expansion in Europe
Russia will still have an advantage.

“Russia, after all, has the home-field advantage along its western borders. America can always make temporary increases in Central and Eastern Europe, but at the end of the day, Russia retains the capacity to surge forces at short notice,” Gvosdev says.

“Moscow's ability to cloak its intentions using snap exercises and readiness drills has dramatically improved in recent years,” he adds.

The current plan looks like “more an effort to send signals rather than to take on the real burdens of rebuilding an American conventional strategic deterrent in Europe.”

Another aspect, which should be taken into consideration, he says, is China’s reaction to the plan.

A United States that is now pivoting back to Europe and which seems unable to fully extricate itself from the Middle East remains in no position to complete its full rebalance to the Asia-Pacific, he further states.

“Russia continues to provide the United States with a suitable strategic distraction while also guaranteeing that a closer Western-Russian rapprochement to counterbalance China is not feasible, at least for the foreseeable future,” he says.

What remains to be seen, the author suggests, is Beijing’s reaction to the announcement.

“Will China decide that strengthening Russia's capacity to respond (and to deploy more of its key weapons systems in its west) serves its own interests?”

Whether we will see a “heated rhetoric in response”, or whether it has any impact at all on “Moscow’s strategic calculations,” remains to be seen.

US Seeks to 'Tame Europe' Drifting Toward Normalizing Ties With Russia