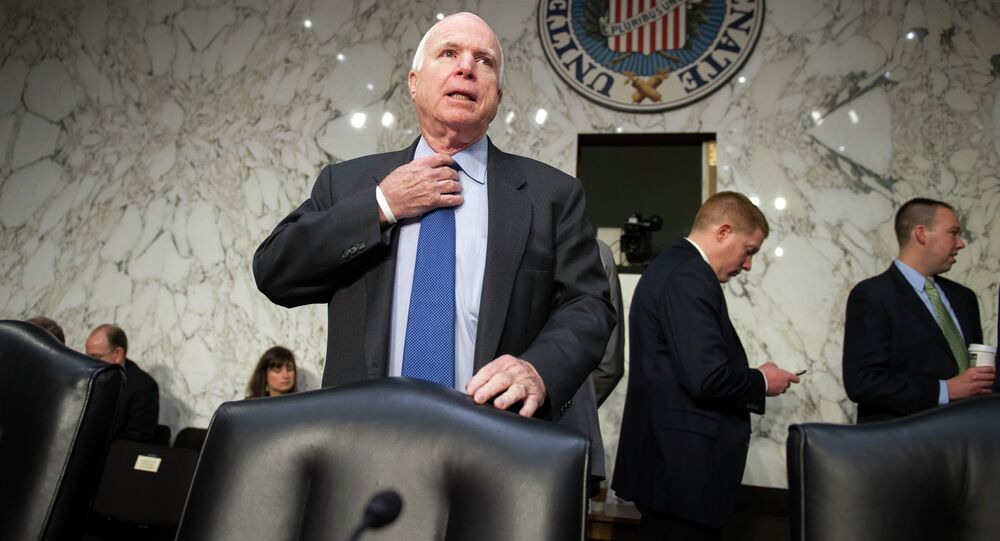 McCain Wants More Anti-Russian Measures After Being Sanctioned by Moscow

As the United States imposes additional sanctions on Russian individuals under the Magnitsky Act, US Senator John McCain claims that he considers sanctions placed against him by Russia to be a "badge of honor."

On Monday, the US Department of the Treasury announced that it would add five Russian citizens to its sanctions list. Aleksey Anichin, Yevgeni Antonov, Boris Kibis, Pavel Lapshov, and Oleg Urzhumtsev will have US assets frozen, and be barred from traveling to the United States.

Moscow categorized this decision as "another blow to bilateral relations" between the countries, and imposed counter-sanctions on several US individuals.

Speaking to Sputnik, US Senator John McCain claims that he is proud of being placed on the Russian sanctions list.

"They [Russian lawmakers] already sanctioned me. I believe it is a badge of honor," he said on Tuesday, adding that he believed more Russian citizens should be added to the US sanction list.

"I think it is important that we keep sending that message…that if you continue to misbehave, we will continue to impose sanctions," McCain said.

The Magnitsky Act allows the US Treasury to apply sanctions on Russian citizens alleged to be responsible for the death of Sergei Magnitsky, while he was in pre-trial detention in Moscow. Magnitsky, a Russian lawyer who alleged corruption at the highest levels of the Kremlin, died of heart failure while in custody in 2008.

The US list of sanctioned Russian citizens includes 39 individuals.

On the issue of broader economic sanctions against the Russian people, McCain indicated that a number of European nations are looking for a way to end the economic penalties.

"I think there is clearly a lot of conversation amongst the Europeans about lifting the sanctions…There are many countries that are looking for the exit sign," he said. "I have been hearing it for months, that there is enormous pressure in a lot of countries, particularly Germany, to lift the sanctions."

McCain added that the final decision on sanctions relief "to some degree, will depend on American leadership."

The issue will likely be addressed on the sidelines of the upcoming Munich Security Conference.

"It will be in the back-chatter, but it won't be visible," McCain said. "It won't be out in the open in the conference, but there will be a lot of conversations among the Europeans."

The US and its European allies imposed harsh sanctions against Russia following Crimea’s reunification in 2014. While meant to target Russia, the sanctions have had a negative economic blowback on the many European economies who rely on favorable trade relations with Moscow.

‘Many More’ Russians Should Be Sanctioned for Corruption