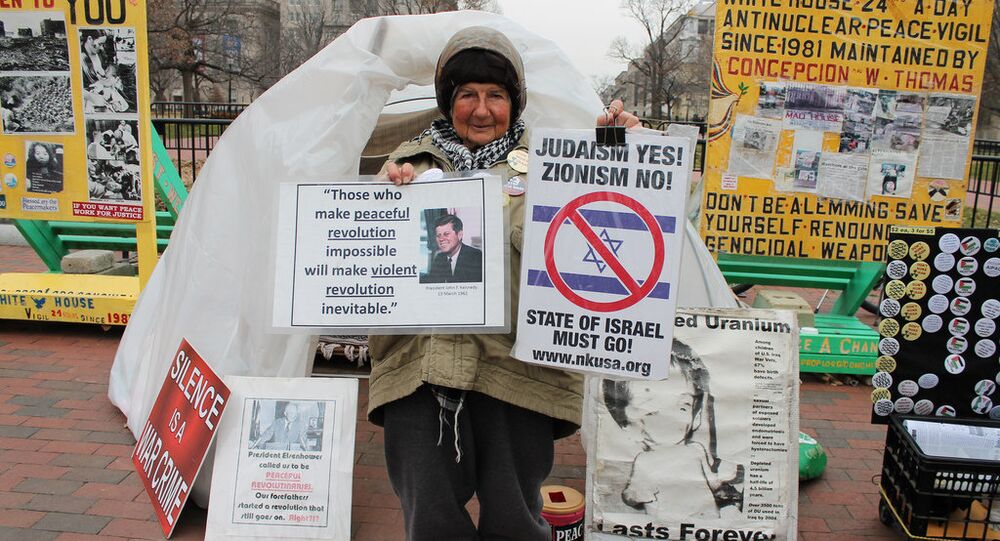 Woman Behind Longest-Running Act of Political Protest in US Dies

Day or night, summer or winter, for 35 years, a homeless woman kept a vigil for peace in front of the White House. On Monday, she passed away for reasons unknown.

© AFP 2020 / Eduardo Munoz Alvarez
#BlackLivesMatter Protests Reveal Polarization of US Political System
Concepcion Picciotto, an 80-year-old locally known as Connie, began her peace vigil and call for nuclear disarmament in 1981 in Lafayette Park across from the White House, joining peace protester William Thomas in a group actively protesting the deployment of nuclear weapons.

Picciotto, a Spanish immigrant and former embassy secretary, had long been an inspiration to peace advocates around the world, who thanked her and begged her not to give up "for us, for our children," according to a website dedicated to her.

"We must teach the children to respect and value LIFE, not material things. That's the only way we will have peace," she once said in an interview. "The people must demand that the governments stop using the people's money to buy weapons, and use it for the people's needs, such as education, jobs, housing and health care; People need to live with dignity. If the people have what they need, there would be no reason to fight."

After the death of Thomas in 2009, she remained with anti-nuclear proliferation protests despite failing health.

Numerous arrests, threats and abuse only strengthened her will to fight. It has been suggested that she held the longest running act of political protest in US history.

Picciotto, a local icon, remained at the White House gates throughout the presidency of five US leaders, from Reagan to Obama. She died at a housing facility for homeless women in Washington, DC, where she had been staying after being hit by a cab 3 years ago, according to the facility's executive director.

"People always tell me, ‘We need more people like you,' " Picciotto stated. "I tell them: ‘But it starts with you. You are responsible for what's going on.' If people were more concerned, I wouldn't have to be there."

The news of the peace activist's death saw many visitors gathering at her usual spot, alongside her tent and signs.

RIP #concepcionpicciotto I had the privilege of meeting you in DC. Thank you for advocating for #peace in this world. 🙏🌎🗽☮☪✝✡☸☦

Rest in Peace #ConcepcionPicciotto an unyielding advocate for peace in our world. Thank you for often unrecognized loyalty to humanity

Protesters Against US Military Base Relocation Clash With Police in Japan

Protests Shake US Despite Government Efforts to Stem Police Brutality

Americans Honor Martin Luther King But Not Really His Dream