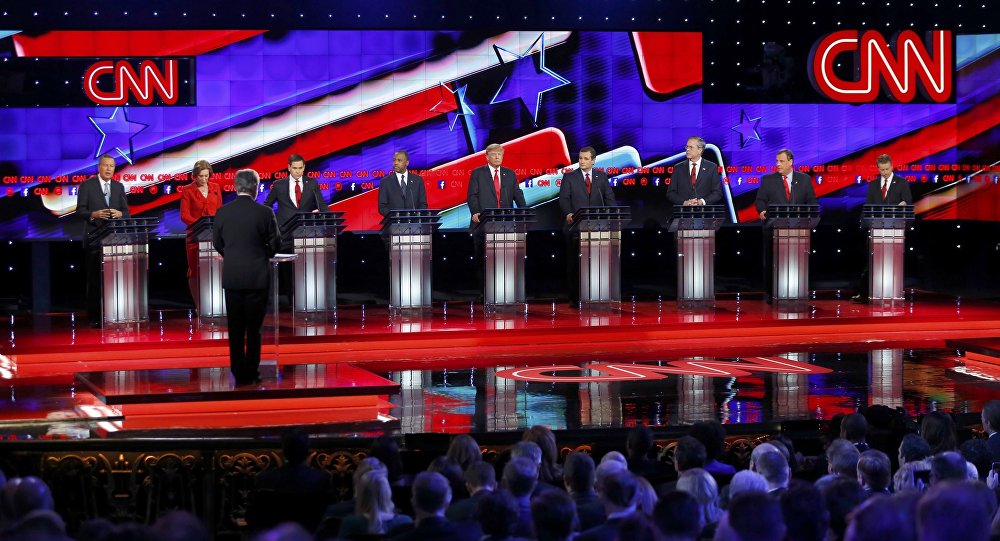 The Russian Academy of Sciences' Institute for World Economy and International Relations published its annual foreign policy forecast, detailing US internal politics. And the winner is...

Hillary Clinton. She, according to the Russian Academy of Sciences' Institute for World Economy and International Relations' (IMEMO) annual forecast is poised to defeat Republican Marco Rubio in November.

The report, ostensibly written to inform Russian policymakers on trends in foreign policy, features issues which are obvious to almost any informed observer looking at the United States in terms of both internal politics and foreign policy. The report was financed by British oil and gas giant BP, according to the report's edition notice page.

"Her success at the last stage of the electoral race will in large part depend on the ability to do the impossible: to offer a golden mean, which will satisfy both of America's [political] poles," the report said.

© AFP 2019 / Andrew Caballero-Reynolds
Second Time’s the Charm? Hillary Clinton Wants New Sanctions Against Iran
According to the report, the "entire female electorate" of the Democratic Party supports Clinton, although polling from New Hampshire shows Bernie Sanders leading Clinton among women, and her downward trend among Democratic women has been known at least since September.

"The party elite reckons that he will not only unite the Republican electorate at the primaries stage, but also at the stage of the inter-party struggle attract moderate independent voters, and in this way counter Hillary Clinton, the most likely Democratic candidate," the report said.

Rubio, who is a distant third after Donald Trump and Ted Cruz in both the Iowa primary and nationwide polling among registered Republicans would probably be flattered by the prediction.

The issues are also an example of issues in Russia and the US' analysis of each other's political systems, which rarely leads to self-reflection. US-based theories on Russia falling apart often have serious tones, for example, although they remain about as serious in retrospect as the theory of the Russian professor who predicted in 2008, that the US would break up into six pieces after a civil war in 2009.

'Popularity of Congress at All-Time Low'

The forecast, other than reinforcing platitudes, also appears to be based on largely outdated, partisan political journalism from the US.

"We can expect an even greater radicalization of supporters in the right-wing conservative Tea Party movement, who thanks to their large numbers will seriously complicate the budgetary process and block any insufficiently conservative bills," the report said.

© AP Photo / J. David Ake, File
Is IRS Still Targeting Americans Based on Politics and Religion?
The House of Representatives' Tea Party Caucus is essentially defunct and the House Freedom Caucus, which formed in 2015 with many of the same principles, only attracted 38 of the legislative body's 435 representatives.

That, along with axioms turned into arguments, such as "Americans are very unhappy with [Congress]" appear to further undermine the report's political analysis.

With its analysis of US politics inaccurate as it is, its foreign policy overview does not appear much better, as it predicts the US supporting Saudi Arabia's stillborn "anti-terror" coalition against Syrian Kurds, a group which the US (as well as Russia) currently arms and supports with airstrikes.

"[The] US will counteract any attempts to secure, through the political strengthening of Bashar Assad's government, military successes achieved thanks to Russian military support for the Syrian Army and forces in solidarity with it (first and foremost, Syrian Kurds)," the report said.

© AFP 2019 / DELIL SOULEIMAN
The End is Near: Syrian Opposition Forces on Offensive in Raqqa
His analysis of other parts of the world contain portions which are simply wrong, such as the idea that Indonesia's intentions to join the Trans-Pacific Partnership (TPP) agreement hurt the ASEAN-China Free Trade Agreement (ACFTA). The ACFTA was originally signed in 2002 and last upgraded in November 2015, with no apparent TPP-related hurdles.

It is not clear why the report signed off on by a reputable institution such as the Russian Academy of Sciences's IMEMO featured largely axiomatic statements and almost deliberate mistakes as forecasts, coupled with obviously Soviet-era political language.

However, the organization's reputation, as well as the outlook of policymakers and therefore Russia's national interests could be hurt by such reports. It could also hurt the memory of the late Russian diplomat and policymaker Yevgeny Primakov, who IMEMO is now named after. The forecast itself neglects to review the predictions made for the previous year, outside of a comparison of its economic growth predictions with IMF projections and actual figures.