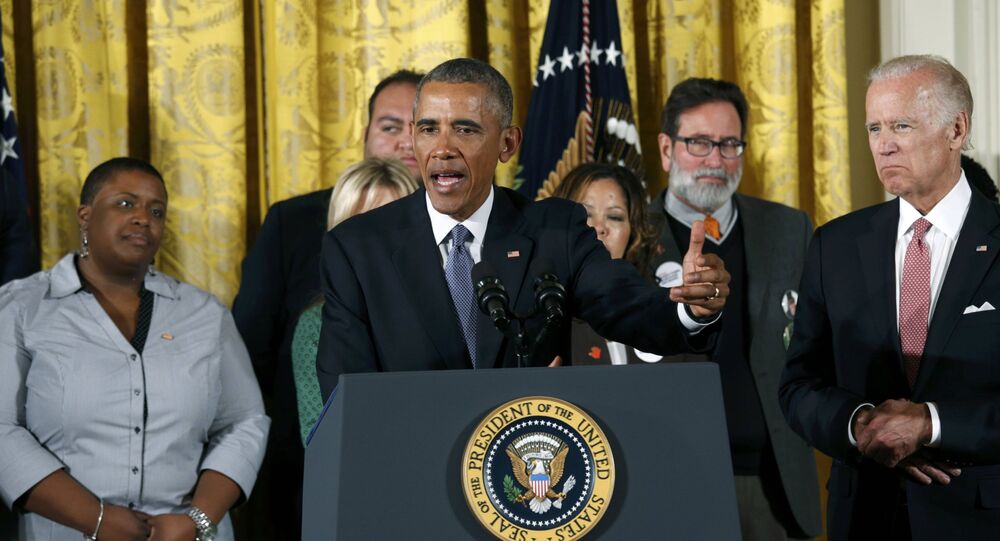 On Tuesday, President Barack Obama teared up as he spoke about the children who were massacred in the 2012 mass shooting at Sandy Hook Elementary School, and US conservatives are now coming out in droves to slam the emotional moment as a fake.

© AP Photo / Evan Vucci
2016 Set to See Obama Take Executive Action on Gun Control
Following the president’s address Tuesday on the executive action gun control measures he will be taking, right-wing outlets such as Fox News, Breitbart, and Infowars rushed to claim that the tears were just a ploy to take away Americans’ guns.

Fox News personality Andrea Tantaros said on national television that she “would check that podium for like a raw onion or some no-more-tears. I mean, it’s not really believable.”

Breitbart writer John Nolte went on a Twitter tirade claiming that the president rubbed Ben-Gay in his eyes to make them tear up.

On Infowars, commentators insisted that the president must have put pepper spray in his eyes, because they could not possibly have gotten red so quickly from simply crying. The blog published an article with the lede, “President employs tearful appeal to emotion in attempt to eviscerate Second Amendment.”

Twenty-six people — 20 children and six adult staff members — were murdered at Sandy Hook Elementary School in Connecticut in 2012 when 20-year-old Adam Lanza opened fire with a rifle, before killing himself when first responders arrived on the scene.  It was the deadliest mass shooting at a school in US history.