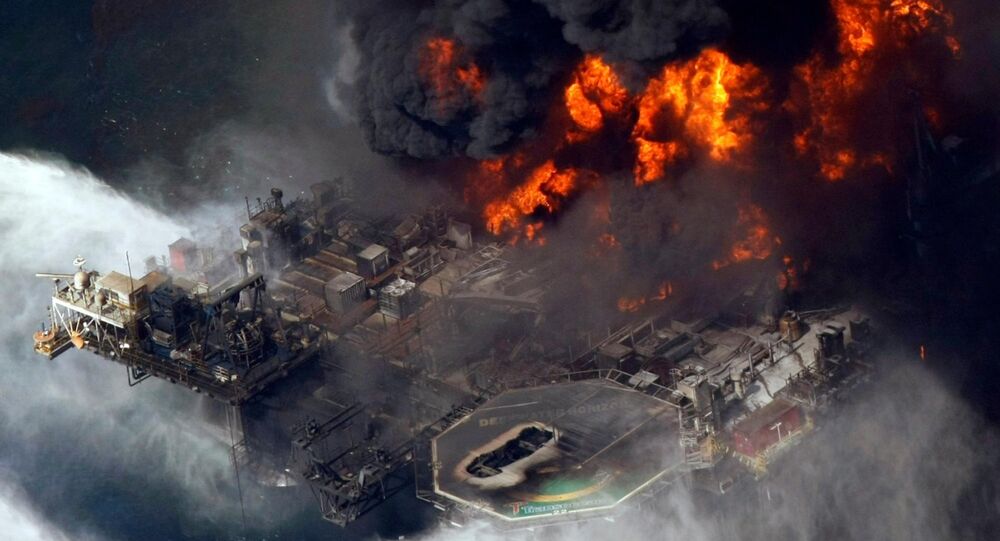 The British oil giant BP’s claims office has reportedly sent thousands of fraud notices to Gulf Coast state residents and business accusing them of fraud before closing for their Christmas vacation.

© AP Photo / Gerald Herbert
BP ‘Got Off Cheaply’ in Settlement for 2010 Oil Spill – Ex US Energy Expert
Thousands of residents and businesses in states heavily impacted by the 2010 BP Deepwater Horizon oil disaster are receiving a lump of coal from the multinational. The company’s claims office sent them “fraud notices” in which they are accusing them of filing fraudulent claims for damages from the spill.

Following the explosion and sinking of the Deepwater Horizon oil rig on April 20, 2010, a sea-floor oil gusher flowed for 87 days, until it was capped in July, in what is is considered the largest accidental marine oil spill in the history of the petroleum industry. The federal government estimated the total discharge at 4.9 million barrels, much of which arrived on shores killing local fish populations and other water-dependent wildlife, destroying beaches, and eviscerating the seafood and tourism industries.

The overall economic impact of the spill has been estimated well into the tens of billions of dollars with businesses going under and tens of thousands of people losing their livelihood. The travel industry is believed to have lost $23 billion as a result. The fishing industry has been affected by as much as $2.5 billion.

© AP Photo
Fishermen and BP Counting the Cost of Deepwater Spill Five Years On
However, BP and some government regulators content that many claims against the company were fraudulent. Those who make such claims without proper proof of the impact they suffered, are subject to criminal prosecution.

The BP claims office is charged with sending notices accusing claimants as frauds. Normally, those notices have been going out in small batches daily but, according to recipients, the company sent out thousands on Wednesday night just before closing for the holiday season.

This has led to accusations that BP is attempting to bully people who likely have valid claims.

"If the goal was to scare people and get them to drop their claims, they will probably achieve that," said Tom Young, a Florida attorney whose clients received 75 of the notices Wednesday night, according to USAToday. "The timing of it is absurd, and the fact that it's a kind of Gestapo, closed-box system is outrageous. They're basically telling my clients and thousands of others, 'You might go to jail, we're not telling you why and, by the way, we're closed. Merry Christmas.'"

SCOTUS to BP:  No Discounts for Largest Oil Spill Ever

BP Gulf Oil Spill Trial Opens with $17B at Stake

BP to Pay Billions Over Gulf Spill in Largest-Ever Penalty: US Media