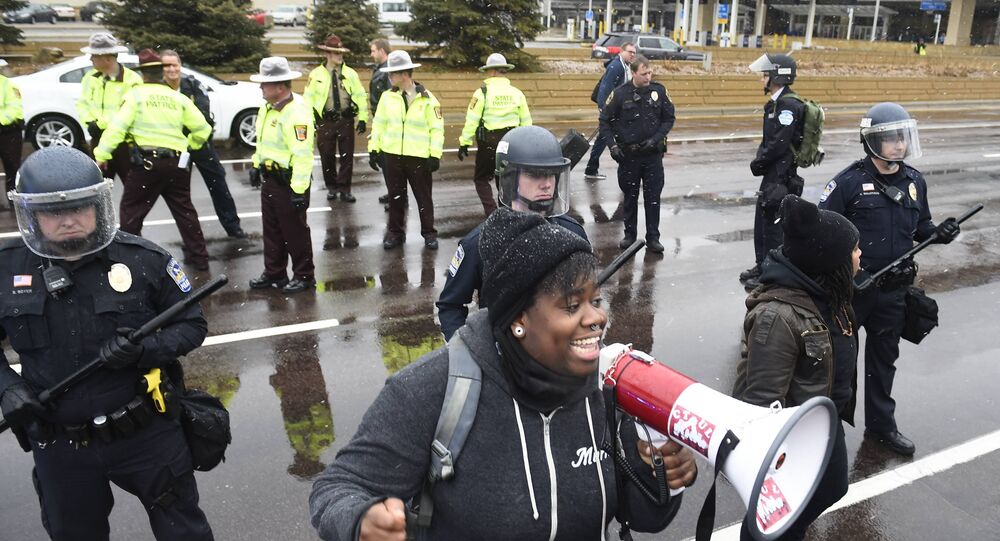 Eight protesters were arrested after hundreds of demonstrators formed a human chain around both terminals at the Minneapolis-St. Paul airport, according to Paul Hogan, the airport's director of marketing and public affairs.

WASHINGTON (Sputnik) — Travel returned to normal at the Minneapolis-St. Paul airport 24 hours after Black Lives Matter protesters briefly brought travel to a standstill on one of the busiest days of the year, an airport spokesman told Sputnik on Thursday.

"Eight people were arrested yesterday, but there is no indication they will be returning today," Paul Hogan, the airport's director of marketing and public affairs told Sputnik of the Black Lives Matter protests.

Frequent demonstrations throughout the United States reflect an acrimonious national debate about the use of deadly force by police, particularly in confrontations with African-American men and youths.

Twitter/Black Lives MPLS
#BlackLivesMatter Protesters Block Terminal, Traffic at Minneapolis Airport
The Black Lives Matter movement said it is angered by last month’s killing of Jamar Clark, 24, who died a day after he was shot by police responding to an assault complaint.

On Wednesday, hundreds of protesters formed a human chain around both terminals at the Minneapolis-St. Paul airport, bringing holiday travelers to a temporary standstill.

Before moving to the airport, the protesters forced stores at the nation’s largest shopping mall, the Mall of America, to close for about 90 minutes.

Other protests were reported near the San Francisco International Airport in California.

Arrests Made in Shooting of #BlackLivesMatter Protesters in Minneapolis