Last week, the trial of one of the officers charged in the death of Freddie Gray ended in a mistrial. On Monday, it was announced that a retrial would begin on June 13.

© REUTERS / Jim Bourg
Video Shows Baltimore Cop Attacking Protester Outside Freddie Gray Trial
After 14 hours of deliberations, an announcement was made last Wednesday that the jury had failed to reach a verdict on all charges against William Porter, 26. His charges included second-degree assault, involuntary manslaughter, reckless endangerment, and misconduct in the line of duty.

"It is clear we have come to a point that we will not reach a unanimous agreement on any of the four charges," read a note from the jurors. The jury was then placed under a gag-order by the judge.

Porter is one of six officers charged in the death of Freddie Gray last April.

The 25-year-old Gray was arrested by Baltimore police and placed in the back of a van for transport. While his feet and hands were shackled, authorities broke protocol by not attaching Gray’s seatbelt, a decision which prosecutors say led to a high-impact spinal injury causing his death. 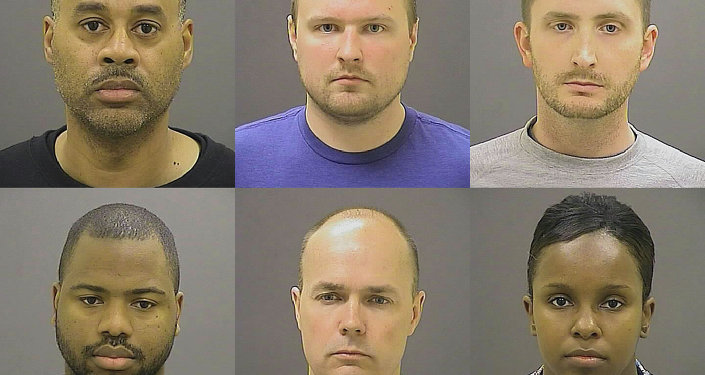 © AP Photo / Baltimore Police Department via AP, File
Baltimore Braces: City is ‘Ready’ for 2nd Hearing in Freddie Gray Murder Trials
During one of the van’s stops, Porter allegedly failed to request medical assistance even after Gray told the officer that he couldn’t breathe.

"Officer Porter knew how serious the injury was," Bledsoe argued.

Freddie Gray’s death led to widespread rioting in Baltimore. Police are preparing for additional violence in the wake of the Porter verdict.

Following the declaration of a mistrial in Porter’s case, two activists were arrested.

Porter is expected to be a key witness in subsequent officer trials, including that of Officer Caesar Goodson. The late date of his retrial could affect those plans, however.

Goodson faces the most serious charge of any of the six officers, second-degree depraved murder, and his trial is set to begin Jan. 6.