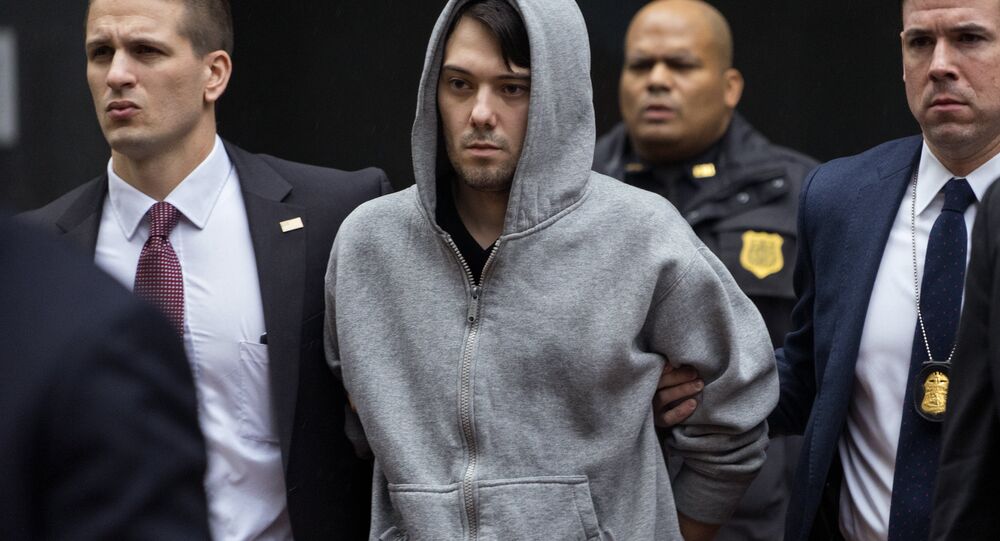 Martin Shkreli, the poster boy of US pharmaceutical industry greed, was arrested by the FBI on Thursday for securities fraud. Though he is currently the subject of a Senate investigation into the “pricing of off-patent drugs,” the arrest is unrelated.

© REUTERS / Brian Snyder
Bernie Sanders Rejects Donation From Pharma CEO Who Hiked Drug Price 5000%
Shkreli, 32, was arrested by federal agents for illegally taking stock from a biotechnology firm he started in 2011, Retrophin Inc., and using the money to pay off unrelated debts when his MSMB Capital hedge fund went broke. Shkreli is accused of illegally taking stock from Retrophin and using it to take care of other business debts through secret payoffs and "sham consulting arrangements."

In August, Retrophin sued Shkreli, their former CEO, having kicked him out of the company in 2014.

"The $65 million Retrophin wants from me would not dent me. I feel great. I'm licking my chops over the suits I'm going to file against them," Shkreli told Bloomberg.

Evan Greebel, a New York based lawyer, was also arrested for allegedly conspiring with Shkreli.

Shkreli rose to infamy in September when he purchased the rights to life-saving drug Daraprim, used to treat toxoplasmosis, which can be deadly for those who have compromised immune systems, such as people living with HIV or cancer – and increased the price 5000%, from $13.50 per tablet to $750.

As news broke of his arrest, the Internet came together to celebrate karma, and hoped that his bail would be set at 5000% of the normal rate.

‘Pharma Bro’ also made headlines earlier this month when he paid $2 million for a private Wu Tang Clan album that he has no intention of sharing with the public. Following his arrest, many have called for the government to seize it and share it with the public.

If convicted on all charges, Shkreli could face up to 20 years in prison.

On Thursday evening, he was released from jail on $5 million bond.