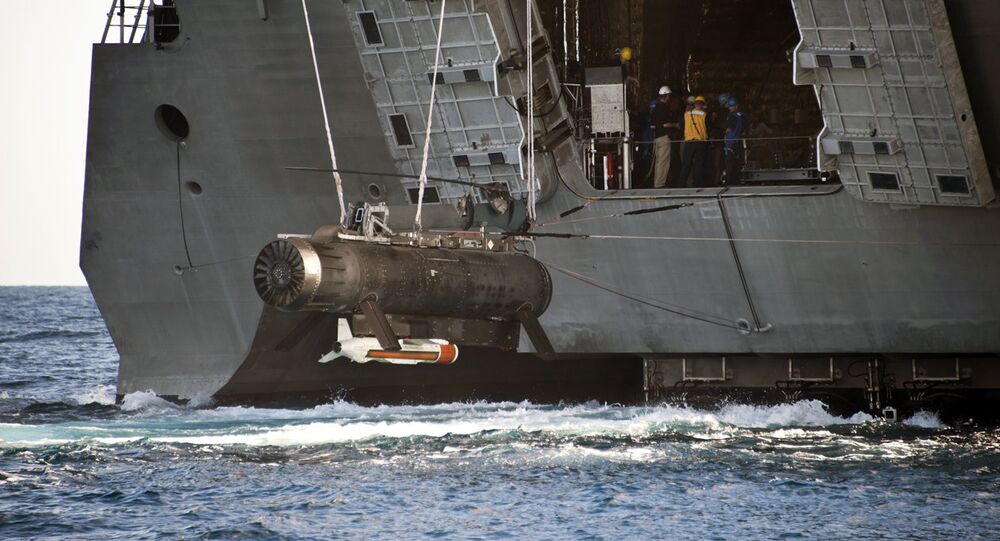 You Sunk My Battleship! US Underwater Mine Hunting Drones Fail 24 Tests

Underwater minehunting drones, designed by Lockheed Martin for the safe, remote detection of explosive devices beneath the waves, failed 24 times during a preliminary trial testing period which began in September 2014 and ended in August.

© Wikipedia / US Navy Photo/Released
Warfare Expansion: US Navy Launches Underwater Drone From Submarine
Most recently, the drones failed 14 times within 300 hours in a five-month round of preliminary trials at sea that ended on August 30, according to Navy test data provided to the Defense Department’s Office of Operational Test & Evaluation.

The failed drones were towed to port seven times, and the intense combat testing required for increased purchases has been delayed.
The US Navy had planned to spend $864 million on 54 drones from Lockheed, the biggest US contractor.

“Frank Kendall, the undersecretary of defense for acquisition, has scheduled a January 19 review of the drone’s reliability woes, the latest setback for the troubled Littoral Combat Ship program. Michael Gilmore, the Pentagon’s director of combat testing, prepared a 41-page classified assessment dated November 12 for the review,” according to a Bloomberg report.

© Wikipedia / Mierlo
Pentagon Considers Secret Underwater Recharging Stations for Submarine Drones
An independent team named by the Navy “is reviewing the drone program because the service realizes “reliability performance has not been acceptable”, the agency quotes Captain Thurraya Kent, a spokeswoman for the service, as having said in an e-mail.

The drone failures apparently add to previous questions about “how much value the US will get from what’s now supposed to be a $23 billion program to build 32 Littoral Combat Ships in two versions made by Bethesda, Maryland-based Lockheed and Austal Ltd. based in Henderson, Australia. Both versions depend on the drones to detect mines from a safe distance.”

US Was Unaware of Russian Underwater Nuclear Delivery System