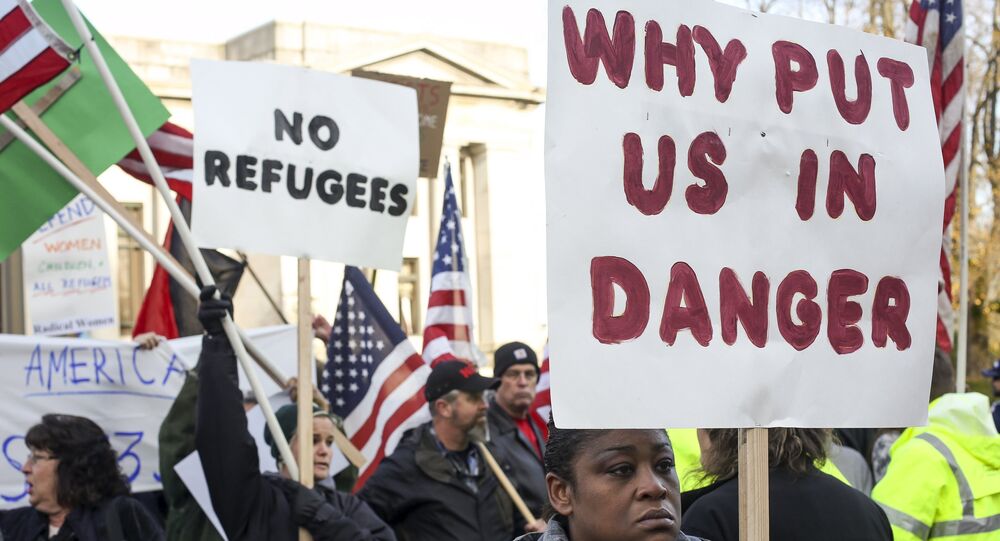 Joe Biden urged US citizens to feel compassion toward refugees and avert a clash of civilizations.

WASHINGTON (Sputnik) – US Vice President Joe Biden called on the US citizens Saturday to not turn away from the Syrian refugees and to "not play right into the terrorists’ hands" by dividing the community.

"Let’s also remember who the vast majority of these refugees are: women, children, orphans, survivors of torture, people desperately in need of medical help. To turn them away and say there is no way you can ever get here would play right into the terrorists’ hands," Biden said in his weekly address.

The vice president, citing a speech by Islamic State leader Abu Bakr Baghdadi, said the group aimed to "manufacture a clash between civilizations. They want frightened people to think in terms of ‘us versus them.’ They want us to turn our backs on Muslims victimized by terrorism."

© Flickr / vtgard
Go North: Americans Threaten to Move to Canada if US Takes in Syrian Refugees
Biden’s words come as the US House of Representatives passed a bill on Thursday afternoon that would block the presidential administration from resettling some 10,000 Syrian refugees as well as Iraqi refugees to the United States in 2016, as was announced by President Barack Obama in September.

Following the deadly terrorist attacks in Paris by the Islamic State on November 13, US lawmakers and state governors quickly warned they would fight Obama's resettlement plan and prevent the refugees from coming into the United States.

After Thursday’s vote, supported primarily by congressional Republicans, the bill will head to the US Senate for a vote despite Obama’s veto threat a day earlier.

Negative Rhetoric About Refugees in US ‘Potent Recruitment Tool’ for ISIL